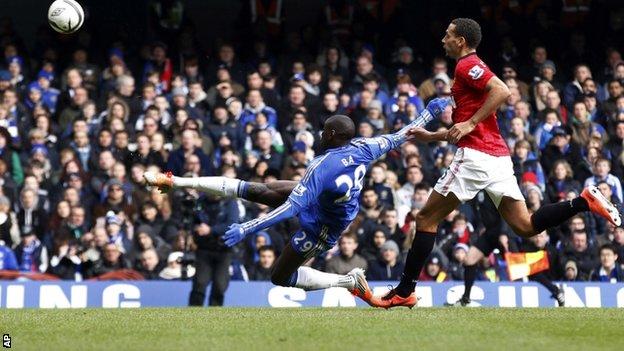 Ba's athletic finish early in the second half leaves United concentrating on winning the Premier League title - with a 20th title all but secured as they currently hold a 15-point advantage.

Benitez attracted criticism for fielding a weakened side in defeat at Southampton on Saturday as they search for the top-four place that would assure Champions League football next season - but will feel a measure of vindication as this was still a win of some significance.

United were without Wayne Rooney because of a groin injury sustained on England duty and lacked some of their usual menace but it still took a save of the highest class from Chelsea goalkeeper Petr Cech to keep out Javier Hernandez's header as they pressed for an equaliser.

They were left to rue the carelessness that saw them cast aside a two-goal lead in the first game and will now focus on next Monday's derby with Manchester City at Old Trafford.

Chelsea's agenda shifts to the Europa League quarter-final against Rubin Kazan at Stamford Bridge on Thursday.

Inevitably, after playing only 48 hours previously, there was a somewhat unfamiliar look to both sides. As well as being without Rooney, United left Robin van Persie on the bench, although Rio Ferdinand returned in defence.

John Terry, Frank Lampard and Fernando Torres were among the Chelsea substitutes - with attacking duties entrusted to Ba.

Eyes were trained on the respective technical areas before kick-off to see if the managers would shake hands after Benitez claimed his old rival Ferguson ignored the pre-match ritual in the Ferguson pointedly waited at the tunnel entrance and, when Benitez emerged, he took a sharp right for a brief handshake.

The quick turnaround in fixtures may have gone some way to explaining a lifeless first half, the monotony only broken by a hamstring injury to Ashley Cole, sustained in a touchline race with Danny Welbeck.

United goalkeeper David De Gea saved with his feet from Ba and Chelsea counterpart Cech did the same to deal with Hernandez's swerving effort from 25 yards.

The deadlock was broken four minutes into the second half in a moment of real quality. Juan Mata demonstrated vision to pick out Ba, who escaped from Ferdinand to hook a fine finish beyond De Gea.

United responded and it took a world-class save from Cech to deny Hernandez an equaliser. Welbeck picked out the Mexican at the far post and his header looked in all the way until Cech showed stunning reflexes to make a remarkable one-handed stop.

Manchester United failed to score for the first time in 23 matches in all competitions.

Van Persie was already waiting to come on and arrived seconds later for the subdued Tom Cleverley. He was soon joined by Ryan Giggs for Nani.

It was Chelsea, however, who had the next big opportunity as Eden Hazard ran through on goal following Michael Carrick's mistake. The Belgian only had De Gea to beat but pulled his finish inches wide.

Van Persie's big chance arrived from Patrice Evra's cross three minutes from time but the striker's usually sure touch deserted him and he hit a poor finish over the top.

United could not muster another clear opening and it is Chelsea who take their place at Wembley on 14 April.