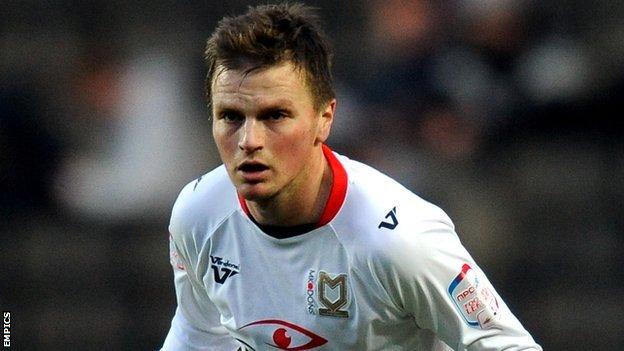 The Dons led when goalkeeper Simon Moore allowed Dean Bowditch's 30-yard strike to slip past him.

But MK absorbed late pressure from the Bees and struck a second when Stephen Gleeson rifled in from 20 yards.

Brentford, who came into the game on a three-game winning run, were bright throughout but their lack of cutting edge in front of goal saw them drop three points behind second-placed Bournemouth, although the London side have two games in hand.

The Dons have now won three out of their last four but need to make up eight points if they are to reach the play-offs.

"Seven players couldn't start today, that was as difficult as it gets.

"It just meant so much to us all, I think you can see by the way we celebrated that goal it meant a lot to us as individuals.

"We will keep going until the end, it's not in my make-up to quit."