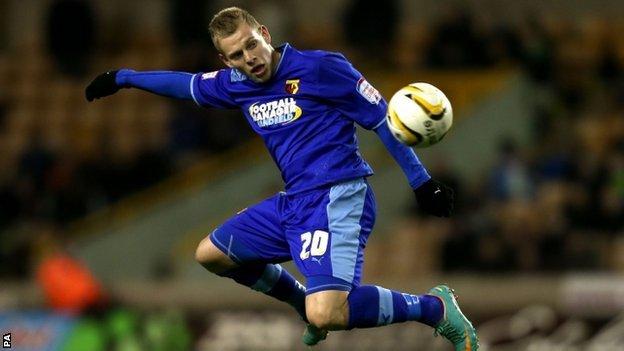 Watford striker Matej Vydra has been named Championship Player of the Year at the Football League Awards.

The 20-year-old Czech, one of Watford's loan signings from Italian side Udinese, beat off competition from Crystal Palace forward Glenn Murray and Blackpool winger Tom Ince.

Vydra has scored 20 goals this season to spearhead the Hornets' bid for promotion under Gianfranco Zola.

There was consolation for Ince who was named Young Player of the Year.

The 21-year-old, now managed by his father Paul, has hit 18 goals despite Blackpool's struggles this season and pipped Vydra and last year's winner, Crystal Palace's Manchester United-bound winger Wilfried Zaha, to the award.

He said: "It's been a whirlwind 18 months for me. It's been fantastic. I left Liverpool to get games in the Championship and I'm enjoying it at Blackpool.

"It's a proud moment for me and my family."

The League One Player of the Year award went to Matt Ritchie, who started the season with Swindon before moving to their promotion rivals Bournemouth in January, with Port Vale's 25-goal striker Tom Pope collecting the League Two honour.

Bradford boss Phil Parkinson was rewarded for his side's remarkable run to the Capital One Cup final with the Outstanding Managerial Achievement award.

He said: "I'm very honoured to receive this award. My name might be on it but it is a team award - not just the team on the pitch but the team off it as well."