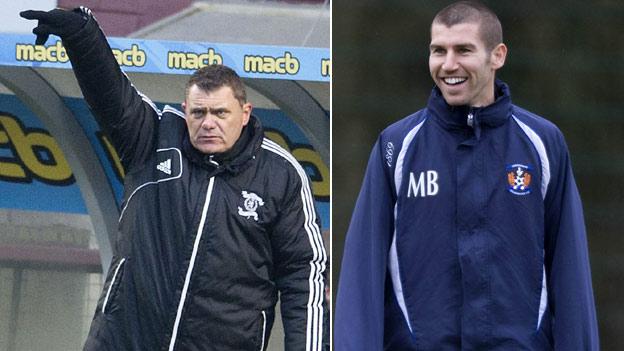 Livingston have appointed Richie Burke and Mark Burchill as their new management team.

Burke has been caretaker boss since Gareth Evans left the club in February, while Burchill has been playing club football in Thailand.

"It's a fantastic opportunity for me," he said. "But I see myself playing for the next two or three years."

The 32-year-old, who won the last of his six Scotland caps in 2000, has a long list of former clubs and was last seen in his homeland with Kilmarnock before spells in Cyprus and Thailand.

"I should up to speed and playing within a couple of weeks," he told BBC Scotland.

"I know there is fantastic potential at the club, with the young kids coming through."

"We see them as the ideal candidates to take forward our hopes and aspirations for the future - to develop our own quality young players and deliver an attractive and successful team at first team level," said Nixon.

"Richie has worked closely with the club since last summer when he arrived to take up a post with the Livingston Youth Foundation and he has extensive coaching experience from his time in the USA.

"Mark is at an earlier stage in his coaching career, but has all the attributes required to make a successful transition from playing into management. As his hometown club, we are delighted to give him an opportunity to start that journey.

"Most importantly, they both share our philosophy in how the game should be played, and from that perspective, they'll build on the strong foundations we already have in place at Livingston."