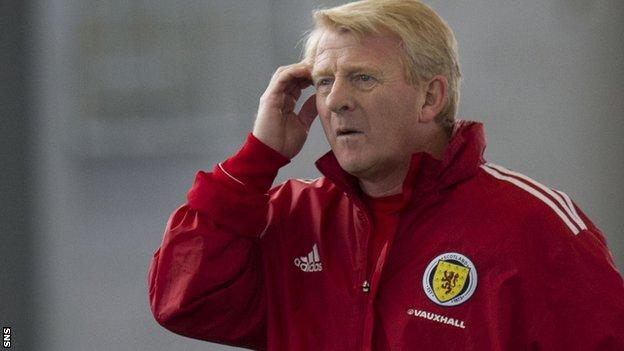 Preparing for Tuesday's World Cup qualifier with Serbia, he recalled the nervous manner in which the Scots started Friday's 2-1 loss at Hampden.

"I can't call it a bad 25 minutes, I thought it was freaky. It was totally unusual," said Strachan.

"We need to get to the bottom of that but I don't think that will happen ever again. I know it won't happen again."

Scotland survived that shaky period to take the lead against Wales but fell to defeat after Robert Snodgrass was sent off for conceding a second-half penalty.

The reverse at Hampden, in what was Strachan's competitive debut, was a third consecutive Group A loss following opening draws against Serbia and Macedonia and leaves the Scots propping up the section.

"Friday was a disappointment for everybody," explained Strachan. "We're all hurting, that's for sure.

"The only way to get rid of those frustrations is by actually playing and winning games."

Striker Steven Fletcher misses the Serbia clash after damaging his ankle in the opening minutes against Wales, while midfielder Snodgrass is suspended following his red card.

Norwich defender Russell Martin has a hamstring problem, while Celtic forward Kris Commons has stayed behind for personal reasons, with Birmingham full-back Paul Caddis given a late call up.

"Tomorrow is a platform for players to prove what they can do," added Strachan.

"[On Friday] that was a midfield group that had never played together at all because of numbers, with some playing out of position.

"It will be different again on Tuesday, in terms of shape and personnel, because of injuries and suspension.

"On the bright side, it gives everybody a chance and gives me the chance to see them at this level.

"There are times when your top players are not available and the group has to say 'if the top ones are not playing, we have to be better as a group'."

Serbia lost 2-0 to neighbours Croatia on Friday and have only been victorious once in the campaign, with a thumping 6-1 success at home to Wales.

"Scotland and Serbia are two teams hurting after the weekend results," added Strachan. "Both will be looking to pick themselves up and improve performances."

"It isn't over, the chances are remote but we have to be determined."

Scotland have not played in a major finals since the 1998 World Cup and McGhee said the squad were determined to improve a poor campaign.

"The players will be given a clear way of playing and they will understand the importance of playing for their country," he added.

"There will be changes, some enforced, but there are five World Cup qualifiers still to play and it is a wonderful opportunity for the players as well to prove to the manager that they are ready to be in the next campaign, so we expect a committed performance."