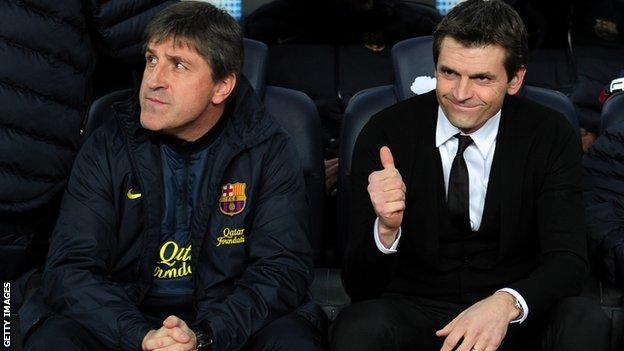 The 44-year-old had a tumour removed from his throat in November 2011 before suffering a relapse last year.

Vilanova underwent surgery in December 2012 and has been in the United States since 21 January to have chemotherapy and radiotherapy.

A statement from Barcelona confirmed the news, although it did not state when he would resume first-team duties.

"The Barcelona coach, Tito Vilanova, will leave the city of skyscrapers this week to return to the Catalan capital," said a statement from the Nou Camp club.

"Jordi Roura has been in charge of the team over the last couple of months and has been in permanent contact with Vilanova to agree on important decisions, but Vilanova's place on the bench has always been kept for him.

"This week the team will welcome their boss back. Welcome home Tito."

Barcelona have played 13 competitive matches without Vilanova and they have won eight and lost three of those.

In his absence, they were knocked out of the Copa del Rey semi-finals by Real Madrid.

However, Barcelona hold a commanding 13-point lead at the top of the La Liga standings and overturned a 2-0 first-leg deficit against AC Milan to win the return tie 4-0 to make it through to the last eight of the Champions League.