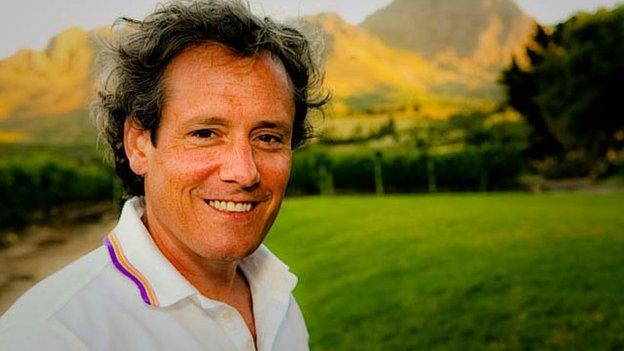 Coventry City are being lined up for a takeover bid from American property tycoon, who has also agreed to buy a share of their Ricoh Arena home.

"He's very keen and the other people in his team are very keen," Elliott told BBC Coventry & Warwickshire.

"This is something I believe would be beneficial to the city of Coventry."

The 46-year-old Florida-born, but now Sweden-based multi-millionaire, who has a fortune estimated at £164m, was last year reported to be interested in buying into Leeds United.

But he and his associates have now visited Coventry to make an on-the-spot analysis on the former Premier League club, who are now under threat of going into administration.

"We took them around Coventry and they liked what they saw," said Elliott.

They already have a deal in place to take over the half share currently owned by the Alan Edward Higgs charity in Arena Coventry Limited [ACL], the Ricoh Arena's operating company.

And the Americans are now understood to be awaiting the outcome of Coventry's date in the High Court in London on Tuesday with their Ricoh Arena landlords, with whom the Sky Blues have been involved in a year-long rent dispute.

Haskell, one of several interested parties, gave an interview to the Sunday Times at the weekend.

"I have an agreement in principle to purchase the Higgs Trust's 50% share of the Ricoh and take over its management," said Haskell.

"The agreement is on condition that I am allowed to purchase Coventry City once the administration process is completed.

"What I want is to see Coventry City back where it belongs, at the top level of the English game.

"To return this club back to the Premier League will take investment in the team and a proper management structure, both of which I can provide.

"Coventry has a fantastic fan base - over 30,000 attended a Johnstone's Paint Trophy game this season - and I want to bring that support back into the club by inviting the supporters trust to take 20% of its shares.

"I also want to bring Joe Elliott back as Coventry's chairman. He's a man who bleeds Sky Blue, who is furious about what the current owners have done to his club."

Despite the bitter battle that has gone on between the Sky Blues' owners Sisu and Coventry City Council, who are also have a part share in ACL, lifelong fan Elliott is still confident of a successful conclusion.

ACL are very keen to see the whole thing together. It's how it should all work, with the football club and the Arena working together

Reports have suggested that, following the club's decision to pull club shop and administrative staff out of the Ricoh on Friday, Coventry may forced to find an alternative venue.

Walsall's Banks's Stadium has been suggested as a possible stage for the Good Friday home game against Doncaster Rovers. But the Sky Blues fans are keen to stay put at the Ricoh, their base since the 2005 move from Highfield Road, home for the previous 106 years.

"It's our home," aded Elliott, who owns a local car-parts business. "ACL are very keen to see the whole thing together. It's how it should all work, with the football club and the Arena working together."

Chief executive Tim Fisher issued a statement on Monday evening saying that they are hopeful of playing their three remaining games of the season at the Ricoh.

"The long-term licence was terminated by the administrator, but we are hopeful that Coventry City Football Club (Holdings) Ltd can reach agreement with ACL to play the final three games of the season at the Ricoh.

"We appreciate that our supporters have been through a great deal of upset and uncertainty, and there is a responsibility on all parties to ensure that the question of where we play our remaining three home games is resolved as soon as possible."