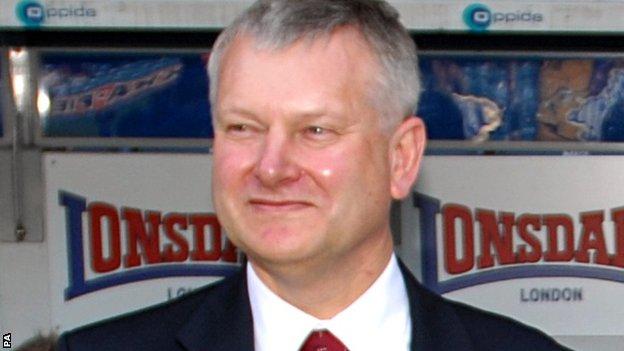 Bristol City majority shareholder Steve Lansdown has stood by his decision over the timing of Derek McInnes's sacking.

Former manager McInnes, who was named as the new Aberdeen boss on Monday, was sacked by the Robins in January after just three wins in four months.

"I think we did everything we could to make Derek's tenure a success," Lansdown told BBC Radio Bristol.

"I like to give my managers the longest time possible to succeed - if it doesn't work out, we move on."

The Scot was replaced at Ashton Gate by Sean O'Driscoll and, despite still being rooted to the bottom of the table, City have only lost one of their last five matches under the former Nottingham Forest manager.

Lansdown has praised the work of McInnes's successor since his arrival at the club.

"We made the move [to sack McInnes] when we did, and it gave Sean time to do something," Lansdown said.

"He's worked miracles with the players we've got to get us back into contention. We've got a chance and hopefully we can take it."

The 60-year-old, who stood down as the club's chairman and left the board of directors in 2011, added that he is always determined to make the decisions he makes as owner successful.

"People will say I make bad decisions and some say I make good decisions - the reality of it is that I make the decisions," Lansdown added.

"I work very hard to make them successful decisions. If they're not successful, I move on, but people can judge me as I wish.

"I spoke to Derek last night and we had a good conversation - I wish him well in whatever he does going forward. He did a good job for us for a while, it didn't quite work out and we moved on."