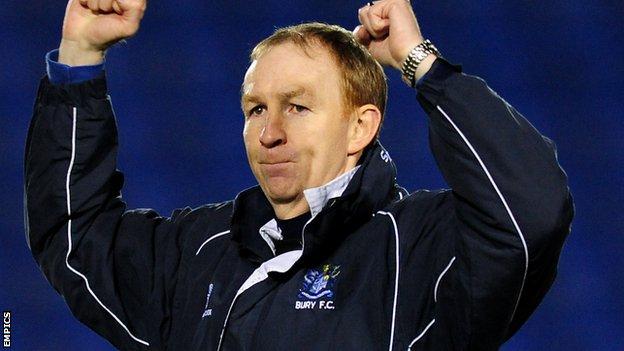 Torquay boss Alan Knill says his side must not let their current good form make them complacent in their battle against relegation from League Two.

The Gulls are now five points off the drop zone after only the third time this season the club has recorded back-to-back wins.

"If we show that for the next six games we'll be OK," he told BBC Radio Devon.

"But if we step off that and start to think we're better than we are it makes it difficult."

The Gulls had to hold on towards the end of the match after Tom Cruise was sent off for a professional foul and Richard Cresswell netted the resulting penalty.

"It was a fantastic game, the players dug in, did the right things and saw out the game," he added.

"It enhances the belief that it doesn't matter who you play, if we are committed and if we are aggressive and if we are passionate we can compete with anyone in the league.

"It was all about the points. It was a bit frantic at the end but great that we took them.

"We set our target away at Southend for the next three games and, I've got to be honest, I set a target and in my mind it was about four points, but to take seven is a great."