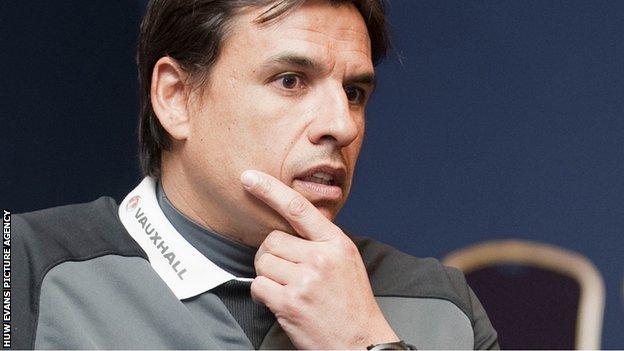 Coleman was appointed on a two-and-a-half year contract which expires in the summer of 2014.

Wales' 2-1 win away to Scotland on Friday moved them third in Group A, although they face a tricky match against Croatia in Swansea on Tuesday.

"If you're a manager at that level then you need the comfort of a long-term contract," Yorath said.

"Before, [former Wales caretaker boss and Wales Under-21 coach] Brian Flynn did a great job bringing them through and Chris needs to take that on and they [the Football Association of Wales] have to offer him that job."

Coleman endured a torrid start to his reign after taking over from the late Gary Speed, suffering a string of defeats as he tried to reshape a squad still reeling from the loss of their former boss.

The turning point came in last October's thrilling home win over Scotland in Cardiff and Wales' record in the last four games reads as a more encouraging won three, lost one.

That one defeat was away to Croatia, who arrive at Swansea's Liberty Stadium on Tuesday night seven points ahead of their hosts and vying with Belgium for top spot.

Croatia are ranked ninth in the world, with Wales down in 71st, and will provide another stern test, but Yorath says the display against Scotland shows real progress is being made under Coleman.

"I just couldn't believe the first half-hour where we kept the ball and we looked as if we're a really, really good side," Yorath told the BBC's Radio Wales Sport programme.

"The only problem was we didn't have a shot but, in saying that, we looked good, we looked comfortable.

"I was sat at home thinking 'this is too good' and then Scotland break away and they get a goal... but I really, really thought that was the best start I've seen from a Wales team for years.

"[Against Croatia] they'll have to do it, because they're up against a side that are very, very good, but the way they did it against Scotland on Friday night was something extraordinary.

"They just passed it for fun but there was no end product. We've got to get that, because if we don't then teams are going to pinch goals against us."