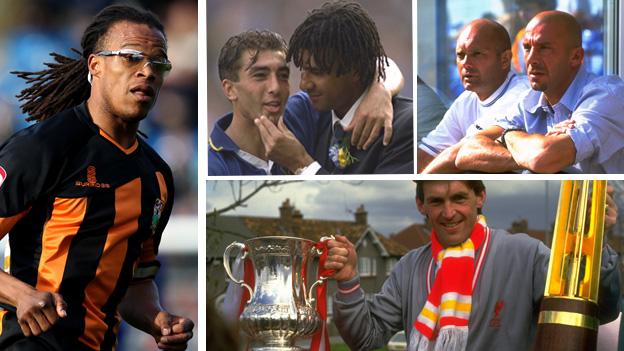 Edgar Davids was used to being described as an icon during his illustrious career as a player. Now the Dutchman has become an unlikely standard bearer in his fledgling role as manager of League Two Barnet.

Davids is one of only two player-managers in the professional game in England - the other is Wycombe's Gareth Ainsworth - making him a pin-up boy for a dying breed.

Go back 10 years, and there were six player-managers in the Football League - Andy Hessenthaler at Gillingham, Bury's Andy Preece, Dennis Wise at Millwall, Gary McAllister at Coventry, Paul Groves at Grimsby and Rochdale's Paul Simpson. Wise even led his side to the FA Cup final in 2004, playing in central midfield against Manchester United at Wembley.

Rewind even further and you'll find player-managers winning the biggest trophies. There was Kenny Dalglish scoring to win the league for Liverpool before landing a historic double; Graeme Souness dominating in midfield for Rangers during a period of huge success for the Glasgow side; and Chelsea employing three consecutive player-managers over a seven-year period and winning domestic and European trophies.

Davids and his employers in north London certainly seem mutually happy with their situation. In exchange for offering the Dutchman his first step on the managerial ladder, the League Two club gained the services of one of the finest European midfielders of the last 20 years, and he is having a huge influence both on and off the pitch.

Davids, 40, told BBC Sport: "First of all, I still wanted to play, that's the most beautiful part for me.

"Being player-manager was normal for me, because in the teams I played for I already ran the team. I still have one of the lowest fat percentages at the club, my running is up to par and I can play back-to-back games."

So why have player-managers fallen so firmly out of fashion?

There has been just one player-manager in the Premier League this millennium, and that's only if you include Stuart McCall's two games in caretaker charge of Bradford City in November 2000.

Richard Bevan, chief executive of the League Managers' Association, says the workload of the modern manager makes it almost impossible for them to play.

A manager will typically have to oversee training and fitness sessions; deal with contracts, transfers and agents; scout players and opposition; and deal with the demands of the 24-hour media.

There is more pressure and less job security, with the average manager lasting just 1.6 years at a club.

"This all makes it difficult to effectively sustain peak performance in both roles over any period of time," adds Bevan.

There has also been a move to "professionalise" football management over the last decade. All Premier League managers are required to hold a Uefa Pro Licence, which consists of 240 hours of work and completion of the Uefa A and B licences.

Football League managers have to hold at least a B Licence and need to be working towards completing the A Licence within three years of being appointed.

Very, very few players find the time to complete the Pro Licence while they are still playing. John Terry might have been linked with the Chelsea job, but isn't enrolled on a Pro Licence course this year, which makes the story a non-starter.

There also seems to be a view among Premier League clubs that experience is key, which is backed up by the stats. Research by Warwick University's Dr Sue Bridgewater, who runs the certificate course for football managers, found that managers with no previous experience won 33.12% of matches, while managers with 10 years' experience or more won 45.13% of games.

Andy Preece has experienced the demands of being a player-manager first hand, having been in charge at Bury from 1999 to 2003, and is currently writing a thesis on player-managers for his Pro Licence course.

The initial transition from "being one of the lads to the boss" was difficult, as was the workload. Preece both took part in and oversaw training, handled signings and contracts, scouted, and dealt with the media, all at the same time as being the best player at a club on the brink of administration.

"We had very few staff, so I was doing a lot," he says, with some understatement. "It was 24-hour, constant, and very difficult to get any rest."

Over time he learned to delegate, allowing his assistant to take coaching sessions and advise on team selection.

"I put myself on the subs' bench a lot to start with, possibly to the detriment of the team," Preece admits. "Then my assistant said 'you should be playing, you're one of our best players'."

The biggest challenge was switching from manager to player mode on match days.

"I remember one incident in particular," he says. "We'd been working on a set play during the week. There was going to be a signal, at which point all the players had to come out and play the offside trap.

"So we're in a game, and someone gives the signal. All the lads stepped up except one, and the opposition went on and scored. I was so angry that it distracted me for the rest of the game and I probably wasn't fully focused on what I was doing."

The 46-year-old actually thinks it would be easier to be a player-manager in the Championship or Premier League, where clubs tend to have a coterie of coaches, fitness staff and scouts.

At Barnet, Davids works with a director of football, Paul Fairclough, who oversees the academy, contracts and transfers, and is always on hand to offer advice and assistance. Fairclough has been manager of the Bees on three occasions and has been at the club for nearly 10 years.

Dutch assistant Ulrich Landvreugd runs training sessions and takes charge from the bench during games. Perhaps this could be a template for some other clubs to follow?

"The management side is new to Edgar and he's combining the two roles very well at the moment," he told BBC Sport.

I always felt I had a big advantage over other managers, because I was out there on the pitch

"Edgar's got Ulrich who works alongside him, and I'll direct them and give them tips. Edgar is still out there coaching and getting involved in the sessions.

"He does as much as the other players - in fact he'll do extra. They are in early in the morning and they'll still be around the club at half past five, six o' clock."

Fairclough admits Davids might have to scale back the number of games he plays in the future. "There are going to be times, certainly next season and maybe this season, when he needs to do that if he's going to keep his energy levels completely up," he says.

"His enthusiasm to play is sometimes all-consuming. And we also have to measure his performances alongside what else he gives on the pitch, which is his leadership."

Hardly any of the recent player-managers have gone on to manage other clubs in the Football League. Preece had a spell as player-manager at non-league Northwich Victoria, and is now director of football at Airbus UK in the Welsh Premier League.

Paul Groves had a very brief spell at Bournemouth after Grimsby, Hessenthaler moved to Dover after a long and largely successful period in charge at Gillingham and Noel Blake took charge of Stoke City's academy and then the England Under-19 team after being player-manager of Exeter.

"There could be a stigma there. You could be type-cast as a player-manager rather than an actual manager," admits Preece.

It is also true that the likes of Souness, Trevor Francis at Sheffield Wednesday, Ruud Gullit and Gianluca Vialli at Chelsea and Wise at Millwall enjoyed the greatest successes of their managerial careers as player-managers. They seemed to have more impact when they were at the centre of things on the pitch as well as off it.

Preece still found his time as a player-manager hugely rewarding.

"It was often stressful and frustrating, but the highs definitely outweighed the lows," he says. "I always felt I had a big advantage over other managers, because I was out there on the pitch and could do something to affect the match.

"I could see things straight away, which other managers weren't able to do. It gave me an early taste of management, which I probably wouldn't have got otherwise."

After experiencing all the pressures and demands of being player-manager at a club that went into administration, Preece feels he is now a better manager than ever. And although he is focussed on his job at Airbus, he hopes to get a chance to manage in the Football League again one day.

He also hopes the role of player-manager does not become a relic of the past, and that other senior pros get the kind of opportunity he did at Bury.