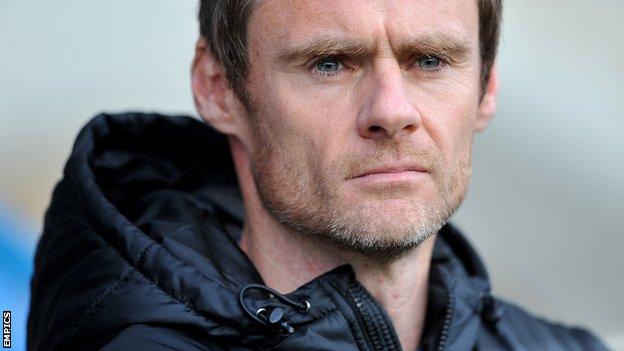 Manager Graham Alexander believes Fleetwood can win their final four matches, which may be enough for them to finish in a play-off spot.

Town are eighth in League Two and three points behind seventh-placed Exeter, although they have played a game more.

"We can still win four games. That's all our target is and that's doable," Alexander told BBC Radio Lancashire.

"We can't control what other teams do. We can control our games and we'll give everything to get 12 points."

The Cod Army, who are approaching the end of their debut season in the Football League, have struggled for consistency under Alexander and his predecessor Micky Mellon, who left Highbury in December.

We had to show it bothered us and show we care, and the players have done that

"We were horrendous so there was only one way to go and that was up," added the former Preston, Burnley and Scotland defender.

"It was a massive reality check for everyone involved. We had to show it bothered us and show we care, and the players have done that. When they do that, we're a good team.

"That's the disappointment for me and for the lads as well. They'll look back on games where I don't think the commitment has been where it should be and it's cost us in games that, with the quality we've got, we should be winning."

Fleetwood host Rochdale on Saturday and also have to face Rotherham (away), Chesterfield (home) and AFC Wimbledon (away) before the end of the campaign.