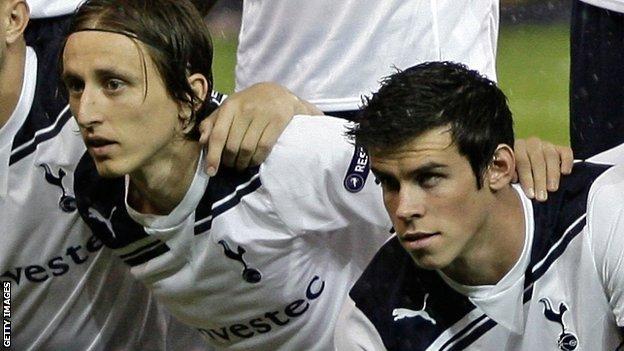 Manager Chris Coleman says Wales must nullify the "genius" of Luka Modric if they are to beat Croatia in Tuesday's 2014 World Cup qualifier with Croatia.

Modric showed touches of class on a heavy pitch when Croatia beat Wales 2-0 in Osije in October 2012.

Wales are up to third in Group A but need a win as they trail pacesetters Croatia and Belgium by seven points.

"On his day he is unstoppable, just like our boy Gareth Bale," warned Coleman.

Modric was a team-mate of Bale's at Tottenham Hotspur before moving to Real Madrid for £30m in 2012.

"He was outstanding [in October]," added Coleman. "It didn't matter what we did with him. The surface of the pitch was awful and he was still picking the ball up in his own half, creating, switching the play.

"He was phenomenal, it was a great performance from a quality player.

"The warning signs were there, he is a terrific player.

"He can play deep, take the ball off his back four, he can play the last pass into the striker, he can effect the game in all areas of the pitch. It is genius to be fair."

Wales beat Scotland 2-1 at Hampden Park on Friday to secure their third win in the last four games.

Coleman's only defeat in those games was the 2-0 reversal at the hands of the Croatians.

Another victory would reignite Welsh hope of making a late charge for the qualifying places.

"We want to win the game first and foremost and see where we are after that," said captain Ashley Williams.

"But we are seven points off them so if we want to do anything in the group we need to win this game, it's that important.

"We think we can win it, obviously we are trying to catch them and we want the points."

A play-off place by finishing second may yet be achievable for Wales, but Williams is under no illusions of the task facing his side.

"They [Croatia] are doing well in the group, they are battling it out with Belgium at the top and they will want the points as much as we do," he said.