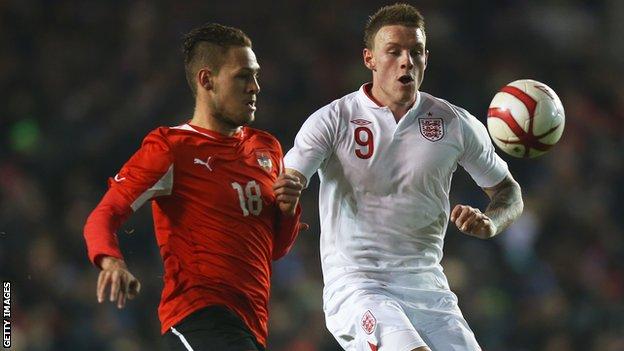 England warmed up for this summer's European Under-21 Championships with an easy 4-0 victory over nine-man Austria.

The visitors had goalkeeper Richard Strebinger sent off for handling outside his area before Jonjo Shelvey's free-kick put the hosts ahead.

Josh McEachran doubled the lead with a penalty after Patrick Farkas was dismissed for a second yellow card.

England have not conceded a goal since they last lost a game, a 2-1 defeat against Belgium on 14 November 2011

It was the Three Lions' ninth successive victory and they will travel to the European Championships in Israel confident of success.

"It was give and take before the sending-off," said England Under-21s manager Stuart Pearce.

"But there were a lot of pluses. They certainly outweighed the negatives."

Pearce's side open the championships against Italy on 5 June before facing Norway three days later and then play the hosts on 11 June.

And England will be serious contenders after an excellent run of form, which has seen them win their last nine matches and not concede a goal in any of those games.

It was all too easy at Brighton's Amex Stadium after Strebinger was shown an automatic red card for handling outside his area with Shelvey scoring from the resulting free-kick in the 40th minute.

Austria then had Farkas sent off and McEachran coolly scored from the penalty four minutes after half-time.

Substitute Sordell made it 3-0 after connecting with Wickham's 66th minute cross.

And Wickham capped an impressive individual performance with a fine 74th minute finish, beating the offside trap before rounding the goalkeeper.