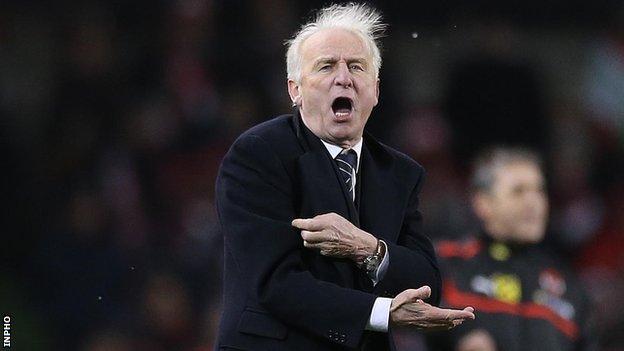 Giovanni Trapattoni was stunned after David Alaba's late goal earned Austria a 2-2 draw against the Republic of Ireland in their World Cup qualifier at the Aviva Stadium.

"The game was finished," said the Republic boss of Alaba's equaliser, which came in the final 30 seconds.

Despite the disappointment, Trapattoni insisted that his team's qualification hopes remained alive.

"We are still in a good position," added the 74-year-old manager.

"We are still (battling) for the play-off with Sweden and Austria."

Trapattoni defended his decision not to bring on Norwich playmaker Wes Hoolahan in the second half even though his tiring team was struggling badly to retain possession.

We invited a bit too much pressure. It's a bit of a sucker punch for us

"Wes Hoolahan? You can say all the options you want after 90 minutes," countered the Irish boss, who appeared to be suggesting that hindsight has all the answers.

"We were tired in midfield. I made a change to help the midfield by bringing on Paul Green (for Shane Long).

The failure of Trapattoni's team to hold on their lead provoked immediate criticism from some media pundits but the Italian insisted that there would be no question of him considering his future in the Republic job.

He said: "Why? Why? You remember we are Ireland. You know we are not Germany or England and so on.

"We are Ireland. We are (still) in a good position in the group.

"We are still in the same position after tonight."

Republic striker Long admitted his "devastation" at the late concession of two points.

"We will be disappointed with tonight but we will have to push on and get over it," said the West Brom forward, who won the Republic's first-half penalty and also back-heeled against the post as he produced an energetic display.

"After we got the second, I thought we would go on and get a third and kick on. We had a few chances where we needed a bit of luck."

Long acknowledged that the Republic had paid for attempting to hold on to their lead in the closing stages rather than applying more pressure.

"I suppose it's a natural thing to do with 20 minutes to go to drop off and try to hold on to your lead," he said.

"I think we invited a bit too much pressure. It's a bit of a sucker punch for us."