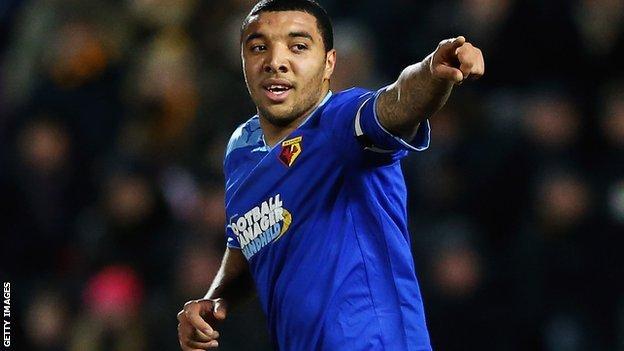 Troy Deeney's first-half goal helped Watford beat Hull to move to within one point of an automatic promotion place.

The Hornets striker curled the ball into the top corner of the net four minutes before half-time.

Hull goalkeeper David Stockdale denied Deeney a second goal with a fine save after the break.

The result sees Watford remain third in the table, one place and a point behind Hull, who trail Championship leaders Cardiff by seven points.

Despite earning only five points from a possible 15 in March, Gianfranco Zola's Watford side travelled north knowing that a win would put their hosts under increased pressure with games starting to run out.

Great on the road

Hull's inconsistent form, which saw them win at Huddersfield having lost at home to Nottingham Forest, seemed to return in a lacklustre first half in which they were second best.

Cristian Battocchio lashed the ball over the bar and Matej Vydra was thwarted by Abdoulaye Faye in Watford's best chances before they took the lead in fine style.

Almen Abdi and Vydra were involved in the build-up before Deeney unleashed a curling effort with his right foot from the corner of the area that gave Stockdale no chance.

Hull's best chance of the half came in stoppage time, but George Boyd wasted the opportunity, shooting against Watford keeper Jonathan Bond's feet from eight yards out.

Bond was the busier of the two keepers early in the second half, making saves to deny Jay Simpson, Robert Koren and Robbie Brady.

Hull's resurgence prompted Watford back into action, and Deeney came close to his second goal of the night - and 17th of the season - when his fierce shot was parried away by Stockdale to his left.

Watford were rarely troubled after that and looked comfortable as they secured their 11th away win of the season.

If they beat Cardiff at Vicarage Road next Saturday and Hull fail to beat Middlesbrough at home, Watford will move into second place.

"The one bit of real quality was their goal but I thought a fair result was a draw. I thought the two teams were very evenly matched.

"This was a six-pointer, they would have gone seven points clear with six games to go and you can imagine with the good team that they are, and with a good manager like Steve (Bruce) is, it would have been such a difficult thing to catch up with them.

"This team never lets me down. Every time there's a game which is very important they always perform. That shows you the character and temperament of this group."