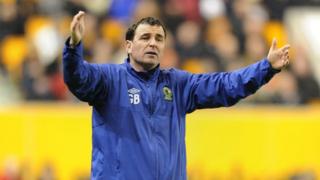 Gary Bowyer admits to BBC Radio Lancashire that he was "stunned" by Blackburn's decision to sack manager Michael Appleton after just 15 games and 67 days in charge.

Bowyer has been appointed as caretaker boss of Rovers for the remainder of the season, although he says that he is taking his second stint in temporary charge on a game-by-game basis and is not looking beyond Friday's Lancashire derby at home to Blackpool.