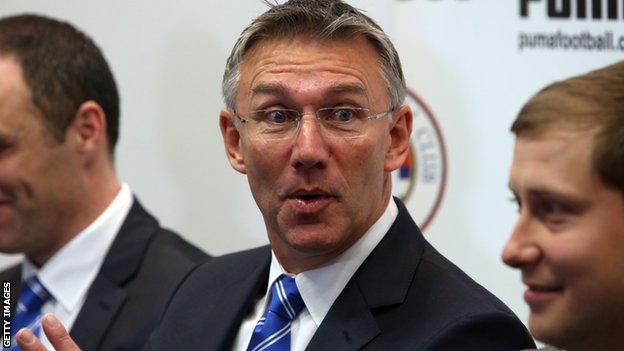 Asked whether he could keep the club in the Premier League, he replied: "Do we dare to dream we can win the games we need to stay up? We have to."

But with his new side seven points adrift of safety, and only eight games remaining, can the former Southampton man keep Reading up?

BBC Sport analyses why he has taken the job, the type of manager Reading have appointed and whether he can complete 'mission impossible'.

But Adkins was another contender, and his chances grew after Poyet rejected the job.

Adrian WilliamsEx Reading captain and BBC Berkshire summariser
Adkins has an impressive CV, won successive promotions and plays attractive football that will please the fans. I think it's a good appointment

"He is a positive man and a positive thinker and he will want to get in there and restore the confidence and belief of the players very quickly," former Southampton manager Dave Merrington told BBC Sport.

"I think the appointment is more one for the future and, if they do go down, they will be expecting Nigel to bring them straight back up."

Adkins was promoted from League One twice while at Scunthorpe, before leading Southampton from the third tier to the Premier League in successive seasons.

Williams said: "I think Nigel Adkins's CV is fantastic. He has done his apprenticeship at Scunthorpe, seems like a calm individual and has huge respect in the game. I think it is a good appointment.

"He won back-to-back promotions from League One and the Championship and led Southampton into the Premier League."

Why take the job?

Adkins on the Saints

"I want to take the opportunity to thank all the people at Southampton. I thank the fans, the players and supporters. We were on a fantastic journey but we have to move on now."

At first, the 48-year-old intimated he was reluctant to rush into another job, with a Premier League managers' arbitration tribunal still to settle a dispute regarding his dismissal as Southampton manager in January.

But when Poyet decided he wanted to remain on the south coast to lead Brighton's push for the top flight, Reading went back to Adkins.

Further talks at the weekend were not straightforward, according to those close to the process. Adkins's dispute with Southampton chairman Nicola Cortese remained the complicating factor. The League Managers' Association (LMA) plans to represent Adkins at a hearing into the unresolved dispute later this year.

But with Reading owner Anton Zingarevich and director of football Nicky Hammond providing assurances about the direction of the club and future investment, Adkins agreed to join.

While their personalities may be similar, their style of football is not, as Adkins encouraged an attacking, fluid style at Southampton, while McDermott stuck more rigidly to formations and systems.

And Reading owner Zingarevich hinted that this was why he chose Adkins.

Zingarevich said: "He has many attributes as a manager. He is progressive, he develops players, his teams play attacking, passing football - but most of all he knows how to win games at all levels.

"This is an appointment we have made both with the short and long term in mind and Nigel can take our club forward."

And Williams echoed the sentiments of the club's Russian owner.

"They do like to get it down and pass it. They play attractive football and that style will please the Reading fans."

Can he keep them up?

No Premier League club in the relegation zone has ever stayed up after a late-season change of boss.

See a full analysis of the fate of struggling Premier League clubs who have changed the manager.

History is stacked against the Royals as no Premier League club in the relegation zone has ever stayed up after a late-season change of boss.

It is the 10th time in Premier League history that a club in the bottom three has changed its manager after 1 February - the previous nine all went down - and Merrington admits it will be near impossible for the Royals to stay up.

"It will be a tall order," said Merrington.

"If you look at their remaining fixtures, they have 23 points, eight games left, are seven points adrift and have lost their last five league matches."

Reading travel to Arsenal on Saturday, before hosting Southampton and Liverpool, and Merrington believes they will need a minimum return of six points from those games.

"The next three games coming up will be absolutely crucial," said Merrington.

"His first game is away at Arsenal and then they have two coming up at home that are absolutely crucial.

"I think if they are going to stay up, then they will need to win those two games. The first one is Southampton, which will be an absolutely cracking game and then they have Liverpool as well, which will be a tall order. It's a difficult one."

Players at his disposal?

Adkins inherits a squad low on confidence, lacking experience and on a poor run of form. Club owner Zingarevich was relatively frugal in the summer and admitted at Tuesday's press conference that they had not been active enough in the transfer market. The blame for this, he said, lay with former manager McDermott.

"What has been tough in the summer is that we didn't have any scouting at all," he said.

"The idea was to bring players in the summer and then do more in January. We tried to sign very big players in January but we weren't really successful. I thought we should have done more."

Asked if McDermott was to blame, he said: "Yes."

But even if they go down to the Championship, Reading believe young players such as Garath McCleary, Hope Akpan, Nick Blackman and Adrian Mariappa will prove wise acquisitions. And in the event of relegation, the club will also have £23m of parachute payments with which to add to the squad.

So what type of manager have Reading appointed?

Merrington, who covers Southampton as a summariser for BBC Radio Solent, knows Adkins well and believes it is his ability to steer clubs to promotion that made him attractive to Zingarevich.

"They've got a guy who now has the experience," says Merrington.

"He has served his time well. I would say he is calm, collected and a steady hand.

"And should Reading go down, they have someone who is quite positive in his thinking and has experience of winning promotion.

"Because of that, I see this as more of a long-term appointment."