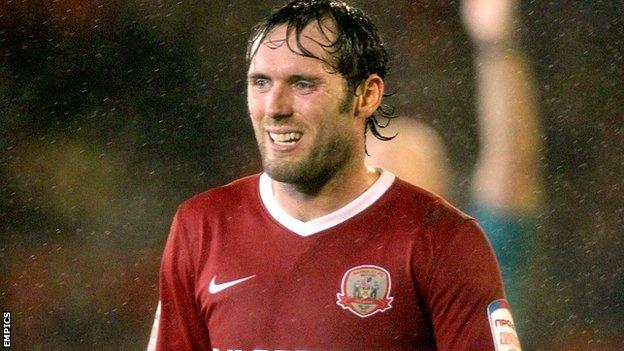 Flitcroft has led the club to 10 wins from 16 games in charge since replacing Keith Hill in January.

The Scot told BBC Radio Sheffield: "His enthusiasm for football is ridiculous and that rubs off on the players.

"He's very passionate about the game and the club. When we see that it helps us get motivated and want to do well for him and for ourselves.

It means a lot to the fans and the people in the area. These are the games you get involved in football for

O'Brien continued: "As a leader he is right up there and he kept calm and positive even when we lost a couple of games.

"The confidence is really high and there's a real togetherness in the squad. We're enjoying working hard for each other and that has shown since he took over."

The Tykes were bottom of the Championship when Hill was sacked, but they have since picked up 23 points from a possible 36 and travel to local rivals Sheffield Wednesday on Saturday, two points above the relegation zone having played a game fewer.

Wednesday sit one place and one point below Barnsley and O'Brien says the team know how much the game means to everyone connected to the club.

"It's a massive game and it is one we are really looking forward to.

"It's good that we're looking forward to it and being excited as opposed to maybe crumbling under the pressure and not wanting to play," he added.

"It means a lot to the fans and the people in the area. These are the games you get involved in football for.

"We'll be looking for three points because the clubs are so close in the league."