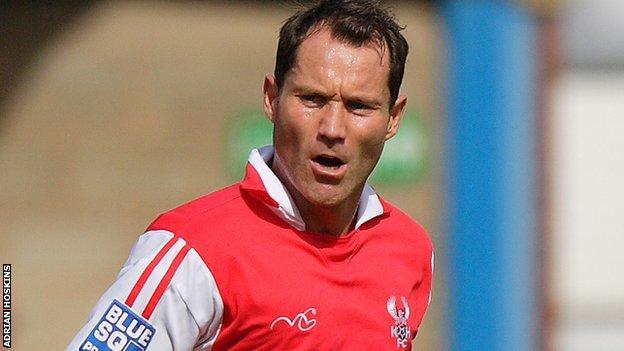 Kidderminster Harriers veteran striker Steve Guinan is to take up a full-time role as academy manager at Aggborough.

Guinan has played only a handful of games as substitute this season, since being talked out of retirement by boss Steve Burr to sign a new one-year deal.

But he will still be registered as a first-team player, as well as extending his coaching role under Burr.

The Harriers' Football Academy is run in partnership with Stourbridge College.

Guinan, born on Christmas Eve 1975, began his career with Nottingham Forest - and he has since gone on to hit over 100 goals for 14 different clubs.

"The development of our young players not only with their football but also educationally has never been so crucial," said Harriers chairman Mark Serrell.

"Steve is without a doubt the ideal candidate to keep driving the academy forward."

Guinan's first team chances have been limited this season thanks to the form of their strikers in helping turn round the Harriers' disastrous start to the season.

Top scorer Anthony Malbon has now hit 15 goals, while Ryan Rowe has chipped in with 10, mostly off the bench.

Jamille Matt hit eight in as many games before earning his club record £300,000 January move to Fleetwood and new signing Michael Gash, the Blue Square Bet Premier's top scorer, has so far hit five in five since his loan move from Cambridge.

Going into Tuesday's home game with Woking, that has helped propel the Harriers three points clear at the top of the table.