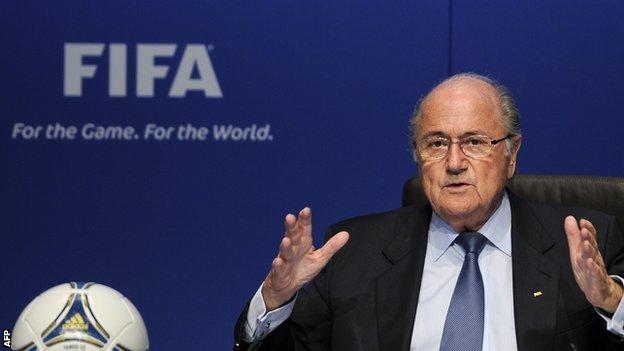 One of Fifa's leading advisers has criticised football's world governing body for "neutering" key recommendations for internal reform and says she is considering resigning in protest.

Alexandra Wrage, a Canadian member of Fifa's Independent Governance Committee (IGC) and an expert in corporate anti-corruption measures, is "frustrated and surprised" that Fifa has failed to back several measures she regards as "really bland, straightforward governance provisions" after a meeting of its leading executive committee last week.

Wrage is now urging the Football Association and other national FAs to adopt the rejected reforms and raise them at Fifa's annual congress in May.

These include measures to:

The deadline for adding items to the congress agenda is this Friday.

"I think we only have a few days as it's a tight schedule but they are permitted to add items to the agenda and this is the time to do it," she said.

"It's going to take some organisation, some speed and some courage but it's absolutely possible."

Fifa launched its reform process almost two years ago amid fierce criticism after Mohamed bin Hammam, an election rival to Blatter, was accused of bribery. Bin Hammam was later banned for life by Fifa, but he continues to deny any wrongdoing.

In addition to questions over World Cup bidding, the long-running ISL case has added to a public perception of impropriety within Fifa - with claims that senior officials accepted payments from its former marketing partner. A file has now been passed to Fifa's ethics adjudicator Joachim Eckert for review, with a decision expected in mid-April.

Following Fifa's failure to take forward the bulk of the IGC's recommendations, Wrage says she is considering resigning from the committee.

Stakeholders have the right to know, especially in an organisation awash with money as this one is, what senior executives are making

"I can only speak for myself but that is one of the options - there's very little point continuing if our recommendations are not being accepted," she said.

"Key provisions that are accepted in the corporate world have not been accepted here - our recommendations just seem to fall off the agenda," she said.

Wrage considered resigning last summer, but ultimately decided against it, when confronted with "blatant" sexism by leading Fifa figures.

Recalling an incident first reported last July, Wrage described how two senior individuals approached her and warned that two candidates suggested for Fifa's reformatted ethics structure were unacceptable because they were women.

"They were the best names we could think of and we were very enthusiastic about them.

"The two executives came over and said: 'You're going to have to give us more male candidates because a female candidate is not acceptable.' I said: 'Did you really just say that to me?' It was startling. It stopped in most settings three or four decades ago.

"I've worked in all sorts of countries, countries with reputations of not valuing their female employees, and I've not had something so startling said so directly to my face."

Pushed to name the executives, Wrage said: "I've been careful not to name them. They were very, very senior and they were clearly speaking, or in a position to speak, on behalf of the president."

When contacted about the claims, a Fifa spokesman told BBC Sport: "The Fifa president has been key to incorporating more women into key positions in football. There will also be a proposal to the congress in Mauritius to include two more women as co-opted members of the executive committee.

"Regarding the candidates to chair the two ethics committee chambers, the Fifa president has explained on various occasions that the candidates needed to have the full support of the majority of the football leaders, which are currently men, and that this was taken into account when deciding who would be the best candidates."

Wrage is also disappointed that recommendations such as independent oversight of Fifa's governance and decision-making have been dropped by the executive committee.

For an organisation sitting on cash reserves of $1.4bn (£923m), Wrage believes such scrutiny should be a "matter of course".

She says she realises football fans will principally be concerned about the awarding process for future World Cups and Fifa will propose to congress that the executive committee produce a shortlist of up to three candidate countries, which will then be voted on by the 209 member associations.

Wrage, however, warns the system under consideration is not sufficiently "robust".

"There is so much money at stake there that [the bidding process] has to be crafted in such a way that there are the most robust controls in place possible," she said.

Full disclosure on salaries is another area where the IGC has encountered resistance, with Wrage suggesting Fifa may feel it is "above" such questions.

She said: "I recognise that it's sensitive information but in the corporate world we got past that a decade or more ago. The stakeholders have the right to know, especially in an organisation awash with money as this one is, what senior executives are making.

"My concern was that we might win on salaries but not on the total compensation package. It was startling to me that we didn't even see salaries going forward."

Integrity checks are a similar disappointment for Wrage, a topic she feels Fifa has effectively "neutered".

But following resistance, led by European governing body Uefa, a watered-down version of the plan will be sent to congress with the six regional confederations taking responsibility for the process.

Wrage said: "The integrity checks will go forward but they have, in my opinion, been gutted.

"This is absolutely critical: centralised, neutral, independent integrity checks. All three of those components are really important. And now they are decentralised and largely self-reporting.

"[This is] really important for restoring Fifa's integrity - the reputation, fair or not, of people with inappropriate backgrounds making it into positions of authority. The fastest way to address that is robust, independent integrity checks."

The IGC will now meet in mid-April to discuss and plan its next move with Fifa insisting that the reform process is incomplete and should not be judged until after congress has voted.

Wrage said many in the group were frustrated by Fifa's decisions over their recommendations and she finds it hard to understand why the governing body of the world's most popular game wouldn't actively seek to embrace the change they've proposed.

"I'm a great fan of transparency. If it could quell some of the fan unhappiness then why wouldn't you do it?"