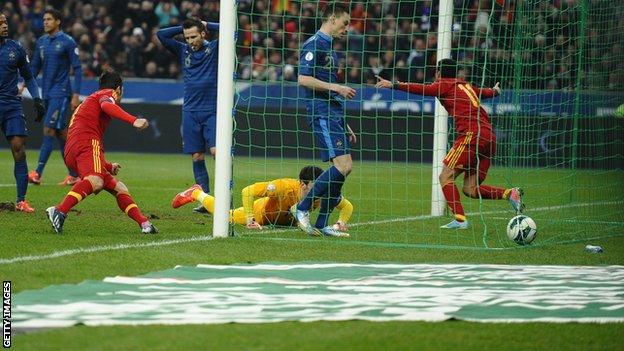 World champions Spain regained control of Group I after Pedro's winner earned them a crucial win over 10-man France.

The Barcelona forward struck in the 58th minute in Paris when he bundled home from close range following a cross by Arsenal's Nacho Monreal.

The Netherlands and Germany are close to qualifying after wins on Tuesday.

How the play-offs work

The eight best group runners-up will be paired into four two-legged ties. The matches will likely be played between 15 and 19 November 2013. The four winners will qualify for the 2014 World Cup.

Spain coach Vicente del Bosque, who had seen his side held by lowly Finland last Friday, said: "They are three welcome points, and this changes our group position for the better.

"There are still three games left so there is plenty of time left to drop points, for both sides. This isn't over, although it's true France missed a chance to pull away."

The Spanish, who enjoyed the better of the first-half exchanges, thought they should have had a penalty when Pedro went to ground under a challenge from Tottenham Hotspur goalkeeper Hugo Lloris.

But Pedro had the last say when he ghosted into the penalty area unmarked to beat Lloris.

Pogba's 78th-minute dismissal capped a frustrating night for the French, with the 20-year-old Juventus player blanked by coach Didier Deschamps as he made his way off.

The Netherlands are close to confirming their presence at next year's World Cup finals after a 4-0 win over Romania.

Elsewhere, Germany are also within sight of qualifying for Brazil after Marco Reus scored twice in a 4-1 win over Kazakhstan, which extended their lead at the top of Group C to eight points.

However, group rivals Denmark are in danger of missing out after being held 1-1 at home against Bulgaria to slip four points off second place.

The race for automatic qualification from Group A is developing into a fascinating contest, Belgium and Croatia both locked on 16 points after respective wins over Macedonia and Wales.

Israel and Portugal moved to within one point of Group F leaders Russia, who did not play, yet Fabio Capello's side have two games in hand on their nearest rivals.

Although Montenegro and England look well placed to contest the top two spots in Group H, Ukraine and Poland are far from out if it.

Robert Lewandowski scored twice from the penalty spot as the Poles hammered San Marino 5-0, while Ukraine won 2-1 at home Moldova. Both Ukraine and Poland are four points behind England with a game in hand.