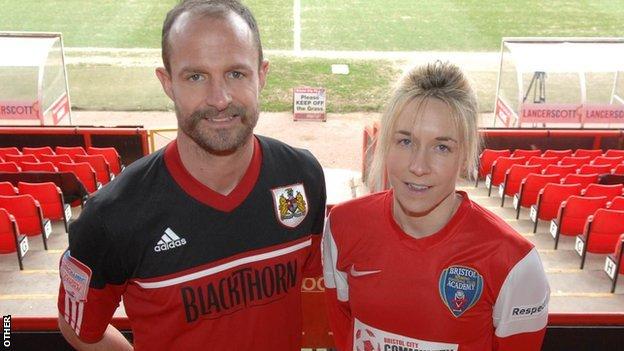 Women's Super League club Bristol Academy are to get the backing of Championship side Bristol City in a five-figure sponsorship deal.

Academy were once linked to Bristol Rovers but have been a stand-alone women's set-up since 2006.

The agreement is for one year, but with a long-term partnership in mind.

"City have been supportive of us in the past so we have links, but this formalises things. It's very exciting," said Academy manager Mark Sampson.

"The one-year deal will give both parties the opportunity to build a strong working relationship, and I'm sure the partnership will be extended."

Academy's home and away kit will promote the work of Bristol City Community Trust, the Football League club's charity arm, during the 2013 WSL season.

Academy have been flying the football flag for the city in recent seasons and I'm delighted that we, as a men's club, are providing them with financial support

The Trust already have a strong commitment to promoting women's and girls' football in the region.

Kevin Smith, City's commercial director, said: "The women's game is growing significantly and we hope an association with ourselves will assist it further.

"Our Community Trust will work closely to engage with current and prospective players and spectators.

"We also aim to introduce more Bristol City supporters to the women's game as the WSL season kicks off next month."

Academy are based at the SGS College at Filton, which is also home to City's youth academy set-up.

The women's team have also used Ashton Gate, playing there in the home leg of their 2011/12 Champions League tie against Russian side Energy Voronezh.

"Academy have been flying the football flag for the city in recent seasons and I'm delighted that we, as a men's club, are providing them with financial support.

"There are lots of women and girls out there who are perhaps attending our games and not Bristol Academy's, or vice versa.

"So to strengthen our links within the city and hopefully boost our respective attendances would be a major boost."

Academy captain Corinne Yorston added: "This is a massive deal for us in so many ways as well as on the playing side.

"Hopefully being linked to the men's club will help us to get more media attention and bigger attendances.

"But it will also hopefully lead to more girls in the area playing football, because the grass-roots level is so important to developing the women's game."