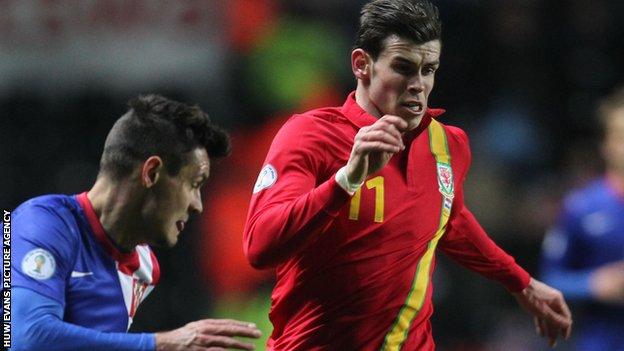 Wales' 2-1 defeat to Croatia has realistically ruled out qualification for the 2014 World Cup, but the performance at the Liberty Stadium provided a source of great encouragement for the future of Chris Coleman's regime.

They built on the great result and performance against Scotland and were the better team at times than Croatia - a team ninth in the Fifa world rankings and full of gifted individuals.

Luka Modric, Mario Mandzukic, and Darijo Srna are players who can cause any side trouble on their day, but Wales shackled them well for most of the match.

They mixed up the passing up well; plenty of short passing but they weren't afraid of going long and direct at times which caused Croatia plenty of problems.

Both sides made confident starts, keeping the ball for good spells and creating opportunities at either end. Once again it was Wales' front four that gave the side great impetus, with the intricate passing and intelligent rotational play causing the Croatian defence problems.

They were rewarded with Bale's penalty, and the growing confidence was reflected by their 70% possession in the final 10 minutes of the first half.

But Bale should have doubled the advantage before the break. The significance of that miss was amplified as the match swung in Croatia's favour in the second half.

Manager Igor Stimac made a key change in formation, employing three at the back. It proved mightily effective.

The midfield trio of Modric, Rakitic, and Sammir immediately saw more of the ball and began to dictate the flow of the game.

Should Wales have responded? There was a case for changing the midfield but Coleman had so few options on the bench.

Aaron Ramsey was suspended, while Jack Collison and Joe Allen were injured. Those are three big players for Wales who are always going to be missed. Croatia had better substitutes and that proved to be the difference between the two sides.

Croatia caused problems from set pieces throughout, an area which continues to trouble Wales.

And as the home side visibly tired more chances came Croatia's way. You did get the feeling they would score at some stage.

It came somewhat out of the blue, though, with Lovren's 30-yard strike somehow evading the palms of Boaz Myhill.

The goalkeeper had performed excellently, but I do point the finger at him for the goal because I feel he should have kept it out.

Yes it was a thunderous strike from Lovren but Myhill could see it from the moment it left his foot. It moved in the air, as these modern balls tend to do, but there's no doubt in my mind that it was a mistake that cost Wales dear.

Croatia stepped up the pressure again, and Eduardo showed his predator's instinct to score the winner. The goal had been coming, but Wales certainly deserved something from the game.

Wales' first-half performance in particular was excellent, with the fluid play and high intensity causing Croatia problems. However, over the 90 minutes Croatia's class shone through they punished Welsh mistakes or lapses in concentration.

Special mention must go to 19-year-old Jonny Williams who once again was mightily impressive. His assuredness and composure on the ball belies his age, and he's equally as comfortable dribbling past opposition players. He is certain to develop into a regular starter for Wales.

Despite a home defeat, there is certainly much to be positive about, and it seems Coleman has his side heading in the right direction.