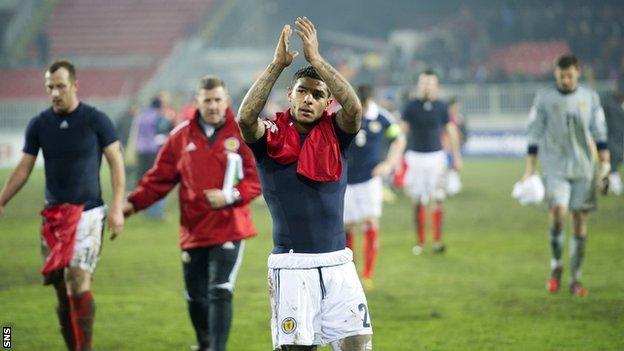 But the bare facts state that, for the first time, the national team has failed to win in seven consecutive qualifying matches.

And Scotland are the first country in the European groups for whom qualification is arithmetically impossible.

Those statistics betray a fallibility that goes way beyond a dip in form and instead suggest a trough that may not yet have reached its deepest point.

There has been little over the course of this campaign or, indeed, the last one to give cause to believe better and happier days are just around the corner.

The matches facing the national team over the remainder of 2013 are two meetings with Croatia, one at home to the abundantly talented Belgians and a trip to Macedonia.

Also this summer, there is the small matter of a friendly against England at Wembley. Few fair-minded observers would look at that set of fixtures and pick out an obvious Scotland win.

And for all the criticism of Craig Levein towards the end of his tenure, a change of manager has not been enough to bring about an immediate upturn in fortunes.

The obvious conclusion, then, is that the players at the national coach's disposal simply aren't good enough to be remotely competitive on the international stage.

Certainly, in each of the qualifiers for the 2014 World Cup, they have been outplayed and outpassed by each of their opponents, who have all possessed players of greater technical proficiency.

Gordon Strachan, in his post-match interview with me for BBC Radio Scotland, conceded that this was not an issue for which there existed a quick fix.

And not only were the Serbians more gifted as footballers, they were also bigger and stronger, said Strachan. Yes, Scotland played with heart, but that is a quality that will rarely suffice at this level, and Strachan knows it.

The thing is, Scotland can currently call upon more players from the English Premier League - considered by many to be the best division in the world - than at any time in the preceding 20 years.

But even the most technically adept of those - Shaun Maloney and Steven Naismith for instance - would struggle to make the starting line-ups of any of the other nations in Group A.

Steps are being taken to try to address this, with centres of excellence being created, new facilities being developed and a new footballing culture being introduced.

That is laudable and welcome, but also at least 20 years too late and of little help in addressing the problem in the short term.

Another fact that cannot be ignored is the starting line-up against Serbia featured not one player from a Scottish Premier League club.

That is a damning indictment of a league that has been on the decline, quality-wise, for years.

I recently visited Switzerland to conduct various interviews about the proposed league reconstruction in Scotland and was told they had reduced the size of the league and introduced rules to ensure young Swiss players were bred and cultivated as that country sought to reverse a decline in the fortunes of their national team.

Other factors have also contributed, but the Swiss have begun to improve again.

Despite the evidence that reducing the size of the league improves the product on the pitch, the SPL was unable to push through such a move and is now aiming to embark on a different venture altogether.

What seems certain is that if the status quo remains, Scottish football will continue to stagnate, at domestic level and beyond.

However, the immediate concern for Strachan is how to put an end to this embarrassing run of results.

Strachan will be afforded time to get things right, but he is currently staring down the barrel of a qualifying campaign with no victories.

And if that materialises, we might have to accept the tag of the worst Scotland team ever.