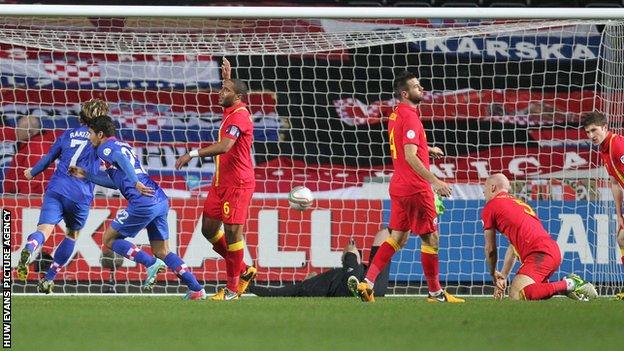 Manager Chris Coleman has conceded Wales have no chance of reaching the 2014 World Cup finals after losing 2-1 to Croatia at the Liberty Stadium.

But Coleman wants to secure third place in Group A to give Wales a better chance of a favourable draw for the 2016 European Championship in France.

"Our fight now is against Serbia, Macedonia and Scotland for that third place," said Coleman.

"We have to fight for that because Croatia and Belgium are gone."

Croatia are level on points with the Belgians at the top of the group - 10 points clear of Wales. The group winners automatically qualify for Brazil, with the eight best runners-up from the nine groups going to a play-off.

Coleman's side have been pushed back to fourth after Serbia moved up a place following a 2-0 win over Scotland.

Wales were bottom seeds when the draw for the World Cup qualifiers was made, consigning them to a tough campaign that includes two sides - Croatia and Belgium - inside the top 20 in the Fifa world rankings.

But a third place-finish will give them valuable ranking points that should ensure Wales are higher seeds for the Euro 2016 qualifiers, the draw for which will be made on 9 March 2014.

And for the first time in the competition's history, a total of 24 teams will qualify for the finals, increased from the 16-team format that has been used since 1996.

"We need to finish in that third spot because that could possibly put us in a better group, or more friendly group, for the next [Euro] championship," added Coleman.

"And 24 teams will qualify for those finals so it's a bigger pot."

Wales had looked set to give themselves hope of reaching Brazil when Gareth Bale put them ahead from the spot with his fifth goal in six internationals.

But defender Dejan Lovren's strike and Eduardo's late goal condemned Coleman's side to a loss that leaves them with too much ground to make up with just four games remaining.

Coleman had targeted six points from the double header against Scotland and Croatia, and Wales' failure to achieve that means the wait for a first major finals appearance since 1958 goes on.

"We needed the three points if we were going to do anything in the group and give us an outside chance really. We are not going to qualify now," he said.

While Wales were stung by the manner of the loss to Croatia, Coleman was quick to point to the plus points and the promising display of Crystal Palace youngster Jonathan Williams on his first start.

The 19-year-old, nicknamed 'Joniesta' by one of his youth-team coaches at Palace, was a lively presence in midfield, and his passing exchange with Joe Ledley led to the Celtic midfielder being brought down for Wales' penalty.

"In the next couple of trips you will be asking me about Johnny as much as you do about Gareth Bale," Coleman added.

"He will go to another level and you can see why everyone is so excited. He's still got a lot of work to do but he's certainly a gifted player."