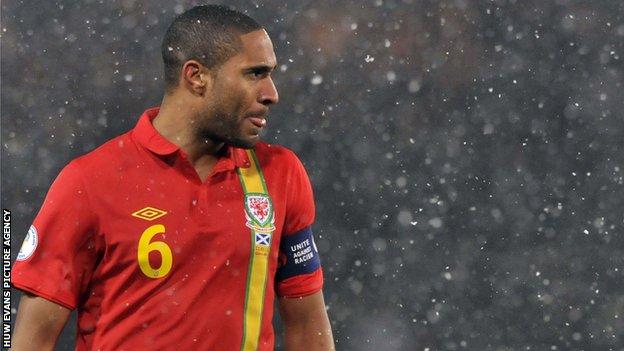 Captain Ashley Williams says it would be "stupid" to discard Wales manager Chris Coleman after the 2014 World Cup qualifying campaign.

Coleman has a contract with the Football Association of Wales until the summer of 2014.

But Williams wants Coleman, who succeeded Gary Speed after his death in November 2011, to lead Wales in their Euro 2016 campaign.

"I have said for a long time he is doing a great job," said Williams.

"He has a tough start due to unbelievable circumstances to come into a job.

"We can all see we struggled but the last few camps have been brilliant. You can see things getting back to where it was under Gary Speed and that has to be pleasing."

Coleman took over as Wales manager from close friend Speed, who was found hanged in the garage at his home near Chester in November 2011 at the age of 42.

Two weeks prior, Speed had led Wales to a 4-1 friendly win over Norway, his fourth win in five matches.

Wales lost their first four games under Coleman, including a 6-1 away defeat to Serbia in the current World Cup qualifying campaign, and have given up on qualifying for the finals in Brazil.

But recent performances and results have improved, and they were 13 minutes away from beating joint group leaders Croatia on Tuesday before conceding two late goals.

Terry Yorath, a former Wales manager, has already stated he believes Coleman deserves a new contract to take his side forward to the next qualifying campaign.

And Williams believes Coleman has started to exert his influence on the Wales set-up after taking charge under extraordinary and difficult circumstances.

"It would be stupid and I cannot believe anyone is talking about changing the manager now," said Williams.

"We know we are making progress and gaining in confidence, and trying to get back to where we were before.

"I think we have done that and we can be pleased with the two games we have just had.

"We have made good strides, we have to to continue it and we have to really make a go of it and finish the group strong."