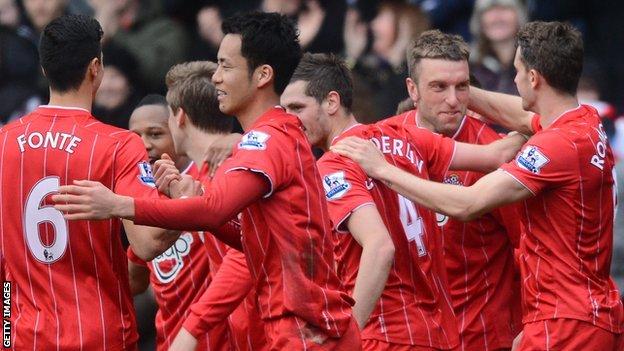 Rickie Lambert says Southampton are no longer scared of the Premier League's "big clubs" as they prepare to face Chelsea on Saturday.

After an uncertain start to the season Saints have recorded impressive victories over Liverpool and Manchester City in recent weeks.

And striker Lambert told BBC Radio Solent: "We've maybe shown the big clubs too much respect in the past.

"I don't think that's the case anymore," claimed the 31-year-old.

Southampton have taken just five points from eight games against the Premier League's top five so far this season, despite scoring 13 goals in those games

Lambert, who signed a new deal at the club last week, added: "We've got more belief that we can beat the big teams.

"That's what we'll be thinking come Saturday after the two big wins we've had in the past few weeks."

Since Mauricio Pochettino's appointment in January Southampton have lost just three games under the former Argentine international's leadership and have pulled four points clear of the relegation zone.

One of those defeats was a narrow 2-1 loss to Manchester United at Old Trafford.

And following an FA cup demolition at the hands of Chelsea in early January, the Saints bounced back a fortnight later to steal a point in the league encounter at Stamford Bridge.

Chelsea have won their last two league matches and have lost just twice in their last ten games in all competitions.