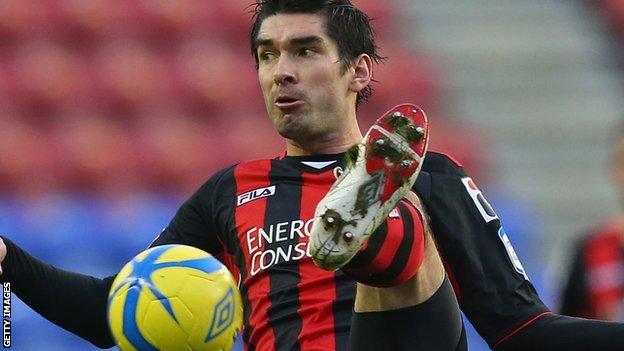 Bournemouth midfielder Richard Hughes says the League One promotion race is too close to predict.

With just one month left Eddie Howe's side are only outside the automatic promotion places on goal difference.

"It can be slightly misleading," Hughes told BBC Radio Solent. "There are still games in hand for many of the teams around us to play.

"I think you also have to take into consideration that a lot of them have got to play each other."

He added: "It's going to change practically on a mid-week basis with all the games that teams have got to catch up with.

The adverse weather has affected the League One schedule in 2013 with eight matches postponed in March alone.

Sixth-placed Sheffield United now have three games in hand over Bournemouth, and Brentford, who are also level on points with the Cherries, have two games in hand.

After their 4-1 win over Bury the Cherries are now on a three-match winning streak, having halted a run of five consecutive defeats earlier this month.