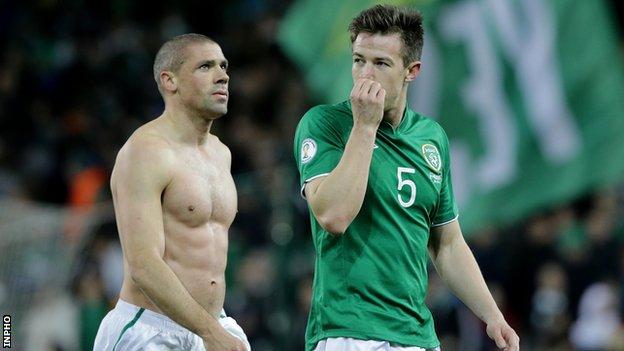 Jonathan Walters admits the Republic of Ireland will probably need to beat Sweden and Austria in September to keep alive their hopes of qualifying for the World Cup finals.

Walters and his Republic team-mates were left dejected after David Alaba's last-gasp goal earned Austria a 2-2 draw in Dublin on Tuesday night.

"But we have got to pick ourselves up now," said Walters on Wednesday.

"Austria away and Sweden at home (are) coming up and they are must-win games."

Before the home clash against the Swedes on 6 September and the away game in Vienna four days later, the Republic will need to negotiate the fixture against minnows the Faroes Islands in Dublin on 7 June.

"There will be lots of twists and turns before the end of the qualifying," added Walters.

"But we have got to play both teams again, Austria away, Sweden at home."

Tuesday's frenetic encounter proved to be a bittersweet evening for the Stoke striker as he marked his 17th cap with two goals which looked to have given the Republic the victory they craved.

His 25th-minute penalty cancelled out Martin Harnik's opener and when Walters headed home in first-half injury time, the momentum was very much with the Irish.

However, all the good work was undone deep into added time at the end of the game when Alaba's shot was deflected over goalkeeper David Forde by the unfortunate Sean St Ledger.

The late concession of the two points was a huge blow to the Republic after their impressive draw in Stockholm last Friday.

As a result, Walters admits that it's a mixed picture after the back-to-back qualifiers.

"There are a lot of players who haven't played many games coming into the squad and some good performances. Especially in Sweden, we defended really well.

"But they are the fine lines in football. That last-minute goal - if that hadn't happened, it would be all praise and cheers at the end of the day.

"It's all ifs and buts, but at the end of the day, we came away with a point instead of three and it's not good enough."