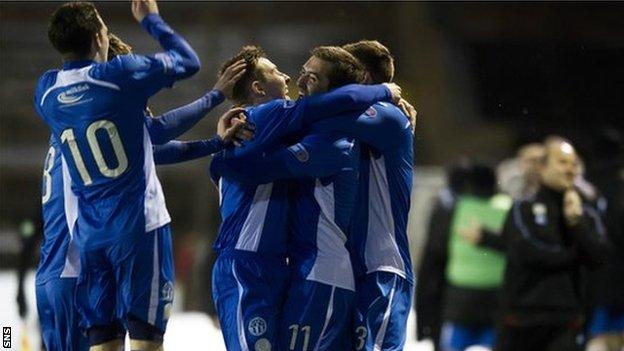 Queen of the South became the first team in Britain to claim a league title this season by thrashing Brechin to win the Scottish Second Division.

Allan Johnston's side wrapped up promotion with six games to spare having lost only once all campaign.

It is an instant return to the second tier for the Doonhammers, who were relegated on last season's final day.

Nicky Clark and Michael Paton each scored twice, with Gavin Reilly and a Ewen Moyes own goal downing Brechin.

Brechin, who were still able to catch the leaders before being humbled at Station Park, also had Gerard McLauchlan sent off.

They remain third in the table, now 31 points behind Queen of the South, who have an insurmountable 27-point lead over second-placed Alloa.

The visitors' huge margin of victory took their tally of goals to 80 in 30 league games, with a goal difference of +62.

They needed only 18 seconds to break the deadlock as top-scorer Clark fired into the top corner from 12 yards, before Paton doubled his side's advantage with an 18-yard strike two minutes later.

Moyes then diverted Christopher Mitchell's cross into his own net from 12 yards.

Paton netted his second from 20 yards and Clark capped off a dominant 45 minutes by taking his tally to 33 for the season with a close-range finish three minutes before the interval.

Shortly after hitting the post, Reilly got his name on the score-sheet from six yards.

A stunned Brechin, playing at Forfar's Station Park due to the drainage problems at Glebe Park, were reduced to 10 men with 14 minutes remaining when McLauchlan was shown a second yellow card for a bad challenge on Clark.