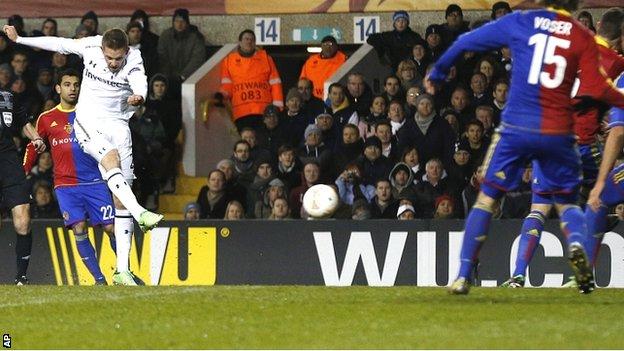 Tottenham's hopes of making the Europa League semi-finals are in the balance after they fought back to draw with Basel in their last-eight first leg.

Fabian Frei headed in to double the advantage, only for Emmanuel Adebayor to pull one back with a volley.

Gylfi Sigurdsson equalised with a deflected strike, but Gareth Bale was carried off with an ankle injury.

The Wales winger landed awkwardly on his right foot during a challenge with David Degen late on and left on a stretcher, clearly distressed.

Bale is Tottenham's top-scorer this season with 22 goals and they have not won a match in which he has not scored since 1 January.

Spurred into a fightback

Any prolonged absence for the 23-year-old could have a significant impact on his side's European and domestic campaigns, with Spurs heading to Basel for the second leg on 11 April and lying third in the Premier League as they seek to qualify for next season's Champions League.

They also lost Aaron Lennon to a first-half injury and William Gallas had to go off towards the end, while Jermain Defoe missed the match with a muscular problem that is set to keep him out for two more games.

Fitness concerns aside, manager Andre Villas-Boas will be pleased with the manner in which his team fought back from two down.

Basel reached last season's Champions League knockout stage at Manchester United's expense and it was easy to see why as a line-up combining youth and experience utilised their slick brand of passing football to hit Tottenham with a series of counter-attacks.

Fabian Schar was first to test Brad Friedel with a stinging drive and Marco Streller was also denied by the Spurs keeper.

Tottenham tried to respond but Basel's greater threat soon told as Stocker fed Mohamed Salah and he slid a low cross to Streller. The captain hit the post and Stocker converted the rebound.

Tottenham still looked to be rattled by that setback when Basel won a corner, Jan Vertonghen deflected it into the path of Frei and he got away from Naughton to power a diving header across Friedel and into the net.

White Hart Lane was stunned but Tottenham suddenly found the sort of form that had brought them four wins from their previous five home games and it helped them battle back into contention.

Bale pulled out to the right and crossed for Adebayor, who produced an air-shot with his first attempt but then volleyed in from close range following Scott Parker's scuffed effort.

Parker was involved again two minutes later when he appeared to miss an open goal from 10 yards out, although replays showed his tap-in was deflected wide by the foot of grounded team-mate Lewis Holtby.

The second half initially followed a similar pattern and, after Salah was foiled by Friedel, Naughton drew a fine save from Yann Sommer.

Tottenham managed to pull level when Lennon's replacement Sigurdsson beat Sommer from 22 yards via a deflection off Schar.

Basel worked hard to regain the lead - Salah and Jacques Zoua both wasted superb chances and Stocker went close with a free-kick.