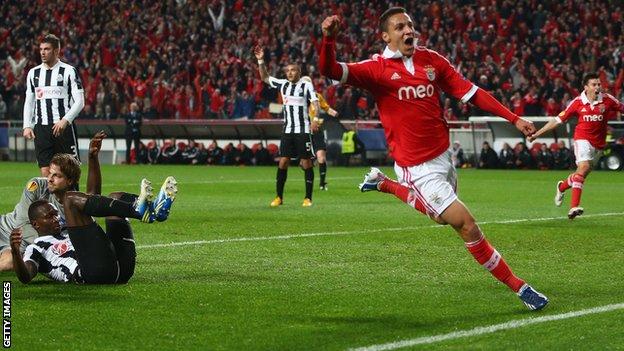 Papiss Cisse tapped in a low Moussa Sissoko cross as the visitors made the most of a bright start in Portugal.

After Cisse struck the woodwork, the hosts came to life and Rodrigo pounced on a rebound to equalise for Benfica.

Cisse hit the post again, before Lima punished a loose Davide Santon back-pass and Oscar Cardozo scored from the spot after a Steven Taylor handball.

Newcastle had kept seven clean sheets in their previous 10 Europa League matches this season but, against Benfica, they were unable to set a club record of five successive clean sheets in Europe

Newcastle manager Alan Pardew has bemoaned the strain the Europa League had put on his squad as they continue to hover above the Premier League relegation places.

The 51-year-old resisted the temptation to field a weakened side, however, and was even able to select Netherlands international goalkeeper Tim Krul after a seven-match absence with an ankle injury.

They faced strong opponents in the Portuguese league leaders, who had already gone past the 100-goal mark in all competitions this season, and only been beaten at home by Spanish heavyweights Barcelona in the Champions League.

But the visitors started the brighter in a rain-soaked Lisbon and went ahead when Cisse poked in at the back post for his 11th goal of the season after Sissoko burst free down the right flank and put in a perfect low cross.

Pardew's side threatened repeatedly on the counter-attack as they looked to take advantage of the high defensive line favoured by the hosts.

They went close to a second when Cisse's shot was deflected on to the post at full stretch by centre-back Ezequiel Garay, after the Senegal international was found by Jonas Gutierrez.

Stung into action, Benfica increased the tempo and equalised when the rusty Krul pushed Cardozo's 20-yard shot into the path of former Bolton loanee Rodrigo, who reacted quickest to side-foot into an open net.

If the Magpies were slightly lucky to go in level at half-time, they threatened after the break as Cisse burst into space and confidently chipped past goalkeeper Artur, only to find the post again.

Benfica then turned the game around with two quick-fire goals just after the hour mark as Newcastle imploded.

First, substitute Lima, fresh from a hat-trick in Saturday's 6-1 thrashing of Rio Ave, latched onto a slack back-pass from full-back Santon and scored past Krul from a tight angle.

Newcastle were reeling, and they conceded again as Sissoko ducked away from a header and the ball struck Taylor on the arm.

Benfica's top-scorer Cardozo kept his nerve to place the ball past Krul from a retaken penalty.

Benfica continued to push for a fourth but Newcastle held on to give themselves faint hope in the return leg at St James' Park on 11 April.