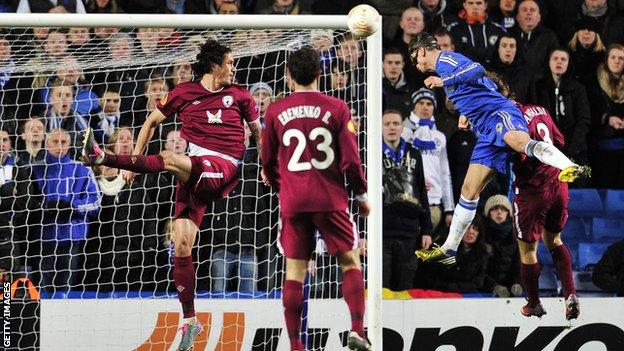 There is still work to do in the return leg in Moscow for Rafael Benitez's side next week, but this was as good as Chelsea's interim boss could have hoped for after a hectic week of action.

Yet this was job done as far as the Blues were concerned on a satisfactory night at Stamford Bridge.

They might have lost their last three Premier League away matches, but Chelsea have now won five in a row in all competitions at Stamford Bridge

This was Chelsea's third game inside a week yet Benitez's side looked far from jaded as they raced into a 2-0 lead.

Having eliminated Atletico earlier in the competition, Rubin were looking to become the first team to knock out both last season's reigning Champions League winners and Europa League champions.

Yet they fell further behind when Moses rifled the ball into the roof of the net from 16-yards in the 32nd minute - his second European goal since joining from Wigan Athletic for £9m last August - after more poor defending from Rubin.

Chelsea were in full command of their 56th game of the campaign, as the fourth best team in the Russian Premier League were forced into a damage limitation exercise.

Goalkeeper Petr Cech, who faced Southampton last Saturday and Manchester United on Monday, had yet to be seriously tested but that was all to change four minutes before half-time.

Terry, an absentee from the starting line-up against United, was harshly adjudged by Italian referee Gianluca Rocchi to have handled Cristian Ansaldi's shot inside his own area and Natcho's textbook penalty gave the tie a totally different complexion.

Suddenly, Chelsea had work to do to avoid a difficult night in Moscow.

Mata went close in the 48th minute with a left-foot shot which was saved before Rubin spurned a glorious chance to equalise when substitute Jose Rondon shot tamely at Cech in a great position.

But Torres capped one of his better performances of the season with a goal 20 minutes from time that gives Chelsea breathing space.

It was made in Spain, Mata providing the cross for his international team-mate to nod home his sixth European goal of the campaign after out-jumping the Russian defence.