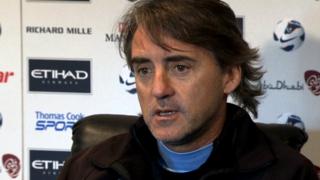 Title race is over - Mancini

Manager Roberto Mancini says he believes the Premier League title race "is over" for Manchester City.

City lie 15 points behind arch-rivals Manchester United with nine games of the season remaining, but Mancini cites Chelsea and Tottenham's challenge for second place and their upcoming FA Cup semi-final against United or Chelsea as reasons for his side to keep working hard until the end of the season.

City overhauled an eight-point deficit to United in the closing stages of last season's Premier League, culminating in a dramatic final day of the season.