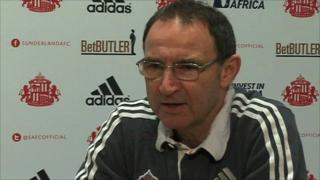 Martin O'Neill says injuries to Steven Fletcher and Lee Cattermole have "come at a bad time" as they fight to stay in the Premier League.

The Black Cats boss describes the injuries as "something we'll have to get over" and calls on the players coming into the team to grab the opportunity to play well in some big matches and help them survive.

Sunderland are currently four points clear of the relegation zone, with their run-in including matches against four top-six clubs in Manchester United, Chelsea, Everton and Tottenham.