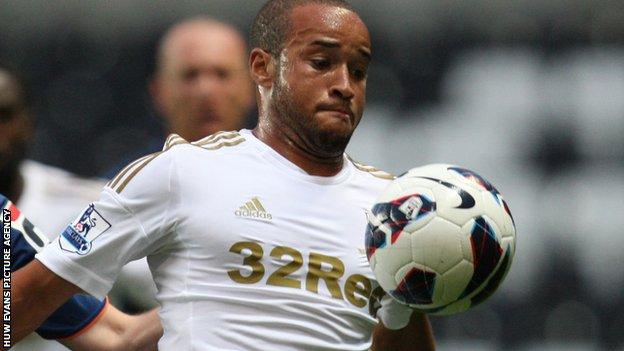 Wales international midfielder Jazz Richards has signed a new Swansea City contract until the summer of 2016.

Richards is currently on loan at Championship side Crystal Palace but has committed himself to the Premier League club for the next three years.

The 21-year-old has made four first team appearances this season - all coming in cup competitions - before his loan move to Palace in January.

"I'm delighted to have signed a new contract at the club," said Richards.

There was interest from other clubs, but Swansea is where I want to be

"Being a Swansea boy, I see my career at the club and I was very keen to commit my future to the Swans.

"By offering me a three-year contract, the club made me feel they have a plan for me.

"There was interest from other clubs, but Swansea is where I want to be.

"Of course, it is very difficult to get into the team because of the quality of players we have, but I feel that I can return next season and push for my place in the manager's plans.

"I played eight games in the Premier League last season, and I think I got stronger and my confidence grew with each match, so I know I have something to offer the manager and team.

"My loan spell at Palace is also proving very beneficial and enjoyable.

"The plan is to finish the season strongly and try my best to get Palace into the Premier League, and then I'll return to Swansea and look to impress [manager] Michael Laudrup enough to be involved regularly in his first-team plans."

Richards signed for the Swans at the end of the 2008-09 campaign, and went on to make his debut as a substitute in a home defeat by Middlesbrough the following season.

Having impressed during the club's promotion campaign, in which he made six Championship appearances, he signed a new 18-month contract in October 2011.

Richards made his senior Wales debut against Mexico in New Jersey in May 2012 and came on as a substitute in Wales' 2-1 defeat to Croatia at the Liberty Stadium on Tuesday.