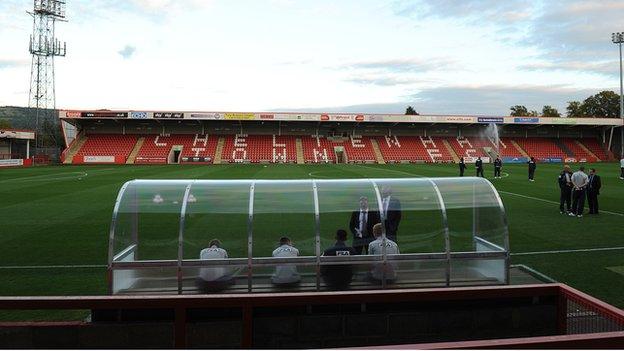 They have been based in Cheltenham since 2010, having previously shared with Forest Green and Cirencester.

Gloucester City's Meadow Park stadium was decimated by flood water in 2007. Since then the non-league club have ground shared with Forest Green, Cirencester and Cheltenham Town, where they currently reside.

The Tigers were paying £40,000 a year for the groundshare, and were recently threatened with eviction after failing to meet payments.

The debts have since been cleared, but the Robins have confirmed the new agreement has been amended in the light of their difficulties to "further protect Cheltenham".

Robins chairman Paul Baker said: "It is a good commercial arrangement for Cheltenham Town, especially in a difficult economic climate where the generation of sponsorship and other commercial income has been to say the least challenging.

"I personally get on very well with Nigel Hughes [Gloucester City chairman] and was quietly confident that we would be able to move forward in a positive way for the benefit of both clubs."

Gloucester have been struggling with financial problems and earlier this month issued an appeal for £25,000 in order to stay afloat until the end of the season.

The players and backroom staff subsequently agreed to defer their wages to help with their cash flow issues.

Plans for a new stadium for the Tigers at the Meadow Park site were submitted to Gloucester City Council in 2011, but have yet to be approved.

It was revealed at an open meeting on Monday that the plans have been "scaled back" to reduce the complexity of the project, and the club hope new proposals will be submitted in April.