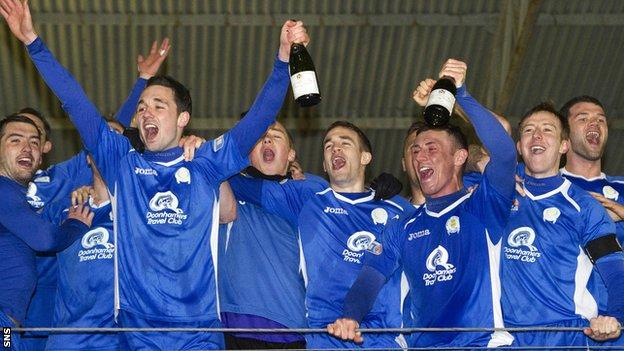 It had to be at Station Park.

Three times Queen of the South have won the Scottish Second Division, three times it has happened in Forfar.

They kindly moved the match to Forfar Athletic's ground in order for historic tradition to be maintained.

A six-goal romp against the only side which could have postponed their party was the latest chapter in an incredible season for the Dumfries side.

They have lost just one league game all season, claimed the scalps of some famous sides and still have a Ramsdens Cup Final date with Partick Thistle to look forward to.

So where did it all go right?

Remember, this was a team sitting firmly in the doldrums at the end of the last season with deserved relegation from the First Division after a dour and dismal campaign.

Many expected them to bounce straight back up but it was surely no formality. Few could have foreseen the style in which they would clinch the title.

As one fan quipped, they deserve a CBE - Champions Before Easter.

It has all been achieved with a commitment to attacking play that has been fostered under new management team Allan Johnston and Sandy Clark.

At first it looked like that might be accompanied by a leaky defence but that has certainly been sorted.

The Doonhamers have kept a clean sheet in more than half their league outings - the best record of any side in the main divisions of Scotland and England.

But he has been ably supported by a team which has performed just about perfectly all season long.

Goalkeeper Lee Robinson has made some inspirational saves, Chris Higgins and Mark Durnan have been outstanding in central defence and Kevin Holt has emerged as a marauding full-back.

Ryan McGuffie has played in numerous positions, as has Chris Mitchell, and both have chipped in precious goals.

Derek Young, Paul Burns and Stephen McKenna have provided an experienced base of hard-work and vision from midfield.

And the creative skills of Willie Gibson, although curtailed by injury, were valuable too.

Up front, around Clark, Derek Lyle has been both goalscorer and provider while Danny Carmichael has tortured defenders with his dribbling skills.

Gavin Reilly, too, has been a constant goal threat throughout the campaign.

Even new arrivals and more sporadic contributors like Marc Fitzpatrick, Michael Paton, Dan Orsi, Steven Black, Kevin Smith and the player-manager Johnston himself have slotted happily into the side.

They know, of course, that a bigger challenge lies in store, whatever structure Scottish football might adopt next season.

But, for now, they deserve to bask in the glow of what has been one of the finest campaigns ever witnessed at Palmerston Park.