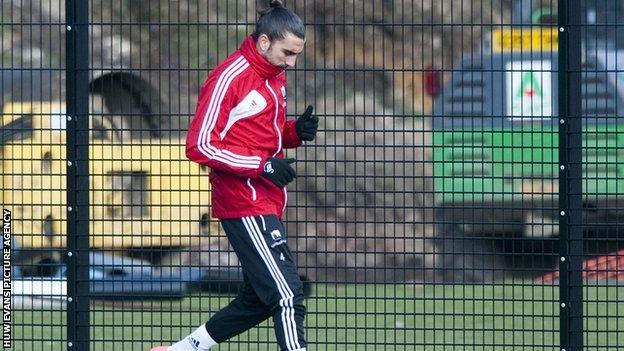 Swansea City defender Chico Flores could make his comeback from an ankle injury against Tottenham Hotspur on Saturday.

Manager Michael Laudrup says Flores, who was injured in the 4-1 Premier League win over QPR on 9 February, could make the Liberty Stadium clash.

"I think he is more or less there," said Laudrup.

"Chico looks good, he still feels something in some movements but that is completely normal for an injury of this kind," said Laudrup.

If he is fit, it is possible he will be in the line-up

"If he is fit, it is possible he will be in the line-up."

The Spaniard ruptured his ankle ligaments and has been training on a local beach in a bid to return to full fitness.

Flores has established himself as a regular alongside captain Ashley Williams at centre-back this season.

Swansea City are in ninth place in the Premier League and 14 points behind opponents Tottenham Hotspur who are fourth. The Welsh side lost the first game between the two sides 1-0 at White Hart Lane back in December.

Meanwhile, Laudrup has also revealed Wales and Swansea full-back Neil Taylor will play a reserve game against Colchester United at the Liberty Stadium on Tuesday as he continues his rehabilitation from a fractured ankle at the start of the season.

Taylor continued his return to full fitness and featured for 40 minutes for the Swans Under-21s at QPR on 14 March.

He was expected to miss the rest of the season after fracturing an ankle in Swansea City's 2-2 draw with Sunderland back in September.

"Neil is playing a reserve game on Tuesday," confirmed Laudrup.

"He will play as long as he can. He is looking fine in training and that is good."

Taylor impressed for Team GB at the 2012 London Olympic Games and was expected to play a big part in Wales boss Chris Coleman's plans.

Teenager Ben Davies was Taylor's replacement for Swansea and he has now made the position his own at the Premier League outfit.