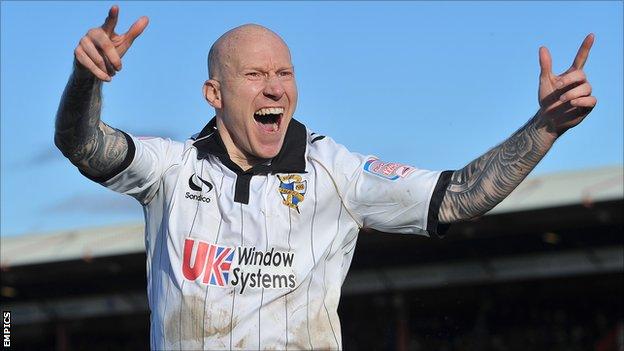 Hughes gave Vale the lead when he headed in Daniel Jones' cross, and then added a second from the penalty spot.

Chris Birchall's low shot made it three before the break, while Hughes' second spot kick secured his treble.

Tom Pope's 32nd of the season and Ben Williamson's brace made it seven, while Matthew Paterson netted a consolation.

The veteran striker, 36, has been a useful acquisition for Port Vale, with nine goals in 14 appearances since his move from Notts County in January.

Despite the heavy defeat, the Brewers remain fifth on 67 points, but their goal difference has been cut to plus three.

Micky Adams's Valiants are now five points behind leaders Gillingham, and six points clear of Cheltenham and Northampton below them.

In addition their goal difference is now plus 35, seven goals more than the Gills, and their tally of 81 league goals is more than any club in League Two.

The win is their biggest of the season and also marks the second time this season that the Burslem-based club have scored six or more goals, after a 6-2 victory against Rotherham in September.