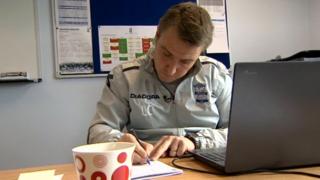 Birmingham City boss Lee Clark has paid tribute to his young players as he leads his team into Easter in the relative safety of 12th in the Championship.

Despite well-documented financial problems at St Andrew's, Clark has seen his team lose just three of their 13 games in 2013 ahead of the Good Friday game at Crystal Palace.

BBC Late Kick Off Midlands spent the day with him ahead of the trip to Selhurst Park, and Clark spoke of his determination to develop a Blues side built around a crop of home grown players.

"The financial situation has allowed me to bring these youngsters through. They have been fantastic in their quality and desire," Clark said.

"What I am getting is Birmingham City fans and they are playing for their club."

BBC Late Kick Off Midlands goes behind the scenes at Birmingham City's training ground at 23:15 BST on Sunday on BBC1.