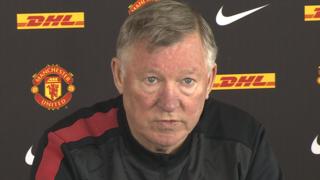 Ferguson insists fans will always targets those that "displease" them and that he expects the controversy to "blow over quite quickly".

The Scotsman adds that he holds "no bitterness" towards next Premier League opponents Sunderland, whose fans celebrated United losing the title to rivals Manchester City last season.

United take on the Black Cats at the Stadium of Light on Saturday.