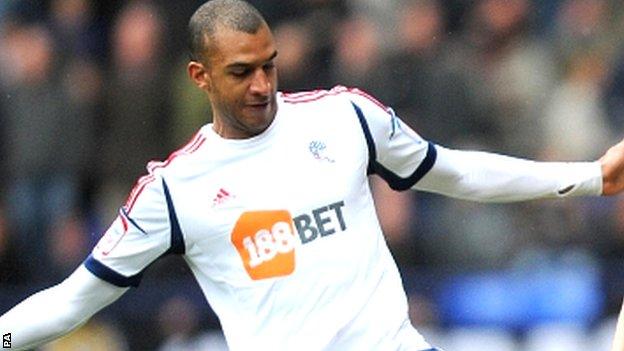 Bolton scored two goals in the first 10 minutes to secure a seventh consecutive home win and leave Wolves only a point clear of the relegation zone.

The Trotters opened the scoring with a close-range finish by David Ngog following Jay Spearing's corner.

De Vries made a series of sharp saves to limit the damage, while Bolton keeper Adam Bogdan also excelled to deny Wolves a way back into the match.

The result means Bolton remain in the hunt for a play-off spot - eighth, and two points behind sixth-placed Brighton - and have registered their best home sequence since 1995.

The Trotters have developed a knack of starting quickly under Dougie Freedman and they did so again to take a third-minute lead.

Spearing's set-piece was headed goalwards by Craig Dawson and, when De Vries was unable to hold the defender's powerful header, Ngog was on hand to slam the ball into the roof of the net.

There was further misery for Wolves when Alonso's shot squirmed past De Vries after Medo Kamara's drive was deflected into his path.

Wolves were indebted to their keeper for preventing further damage.

Lee Chung-Yong cut in from the left to bring a superb save from De Vries, who went on to thwart Marvin Sordell from close range.

Tongo Doumbia replaced Jake Cassidy at the interval as Wolves boss Dean Saunders looked to revitalise his attacking options, but Ngog should have given Bolton further breathing space when sent clear.

He then forced Wolves substitute Adam Hammill wide when well placed, while De Vries saved again from Ngog before full-time.

"There are a few games to go and we will try to get over the finishing line. We started the game so well and in the first 30 minutes we expressed the talent that we've got and, if we'd have been better at finishing, we would have been four or five up.

"In the second half you then saw a very organised team who could hold out for the win, which is something we weren't at the start of the season.

"I think that teams and even fans of other teams are looking at us as a club facing the right direction and getting better.

"The problem for us is that the games are running out, but you can tell by today that we're going somewhere as a team and that we are more than capable of making that final push."

"We started flat and that's something that we haven't been doing since I've been here. Do I think we deserved something out of the game? Not really. We gave ourselves too much to in the first 20 minutes and our keeper made two or three cracking saves to keep us in the game.

"Sometimes emotionally and mentally the Championship is so demanding and that was what was wrong with us today. I changed it after 20 minutes just to keep us in it and Kevin Doyle and Adam Hammill missed two great chances.

"But they've got very good players and are a top team in good form and we've bumped into them at a bad time. All in all we've got to take the positives out of it because at least we never crumbled and, after Huddersfield drew, we've got a chance to do them serious damage if we beat them next week."