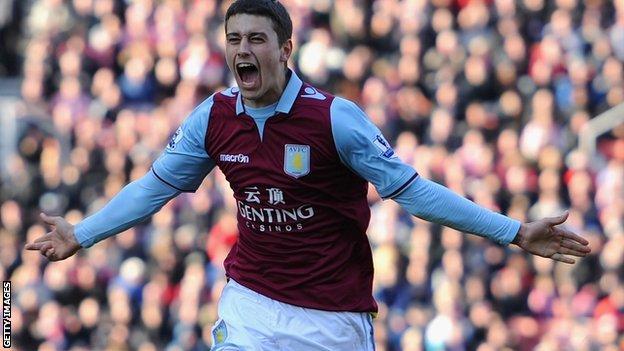 Aston Villa moved out of the relegation zone by beating Stoke, whose own survival prospects took a blow.

Gabriel Agbonlahor gave Villa the lead when he side-footed in from close range at the second attempt.

Villa almost added a second when Andreas Weimann's effort came back off the post, before Michael Kightly slammed in a shot to level for Stoke.

But a spectacular Matthew Lowton strike restored Villa's lead and Christian Benteke slotted in to wrap up the win.

It was a storming finish to the game from Villa as they claimed a third victory in four games to lift them three points above the relegation zone.

Wins for Wigan and Sunderland on Sunday could see Paul Lambert's side fall back into the bottom three, but this performance will give Villa plenty of confidence for the run-in.

In contrast, Stoke have won only once in their last 13 league outings and find themselves just four points from the bottom three, with their form and confidence looking increasingly fragile.

The Potters had an early penalty appeal turned down when a Jon Walters cross hit the arm of Villa defender Nathan Baker, and matters soon got worse for Tony Pulis's men.

"Aston Villa have thrown away so many games from winning positions but then came that goal from Matthew Lowton, which was a fantastic strike. Christian Benteke added to the Villa party and they were worthy winners."

Hesitant defending proved the home side's downfall as Villa took advantage of their let-off to quickly take the lead. Lowton combined with Jordan Bowery on the right flank before firing in a low cross for Agbonlahor, who scored after his initial shot came back off Geoff Cameron.

Stoke looked shocked and Bowery, 21, almost capitalised when he ran at the flailing home defence and curled an 18-yard shot into the side-netting.

Villa now had a firm grip on the game and again came close to a second when Weimann was denied by the woodwork.

Agbonlahor slipped a pass inside to release his fellow forward and the Austrian's low side-footed shot came back off the foot of the post, Potters keeper Asmir Begovic appearing to get a vital touch.

Agbonlahor then thought he should have had a penalty, racing through on goal before going down as he skipped past the outstretched leg of Begovic. The Villa striker was instead booked for diving.

Stoke were booed off at half-time and the Potters produced nothing to improve their fans' mood after the interval.

Instead, it was Villa who again went close when left-back Joe Bennett found Bowery, who got past Marc Wilson too easily but saw his shot blocked by Begovic.

Stoke, in danger of finishing bottom of the Premier League scoring charts for a second successive season, failed to make any real chances until a belated rally produced an equaliser. Midfielder Charlie Adam helped on a Walters pass to fellow sub Kightly, who fired in from 12 yards.

But it was a false dawn for the home side as Villa responded with Lowton's superb strike, the right-back chesting down a clearance 30 yards out and volleying spectacularly into the top corner.

Benteke completed the win when he broke clear late on and side-footed past Begovic.