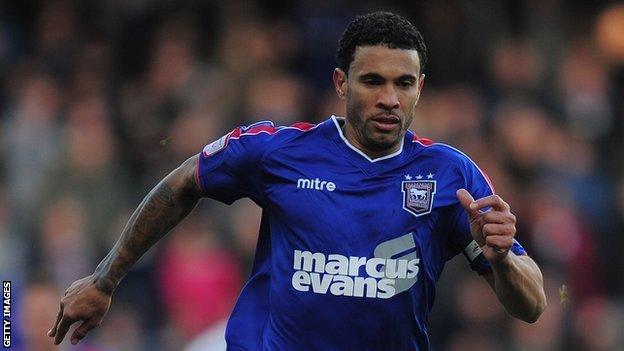 Carlos Edwards scored an injury-time winner for Ipswich as Derby paid for missing a penalty for the fourth time in a row.

Jamie Ward's spot-kick was saved for the second straight home game after a foul on Richard Keogh by Tommy Smith.

Derby striker Conor Sammon hit the post and Ipswich goalkeeper Scott Loach had to make a string of saves.

But the hosts could not break through and Edwards's long-range strike sealed all three points.

It was a fifth straight clean sheet for the Tractor Boys and an eighth in their last 10 league matches as they extended their unbeaten run to five games.

The defeat ended a series of three successive wins for Derby, who only had themselves to blame after their latest penalty blunder.

After Keogh was adjudged to have been pushed by Tommy Smith following a corner, Ward's low penalty was saved by Scott Loach with his legs.

Derby striker Chris Martin, on loan from Norwich, had the ball in the net just after the hour mark, only to be flagged offside.

And the hosts paid the price as Edwards found the bottom corner from 25 yards.

"We didn't start as brightly at home as we have been doing but once we got into our stride we played some great stuff and if we score the penalty we come in at 1-0 and take it on from there and could have won the game comfortably.

"That's the last four, so we will certainly look at changing our taker now. When you miss one, you don't mind but when they miss two consecutively... we will change our penalty taker.

"It's a highly unusual stat to miss four on the spin - incredible, really. Me and Andy Garner (Derby coach) are fighting over the next one!

"We will have a chat with the lads and sort it out. Someone will stand up. There's no shortage of volunteers for it

"We burgled it. I thought I heard the sirens and I said 'shut the doors, the police are coming!'

"'Did we deserve the three points? Not on that performance because they were better than us.

"We saved a penalty and had to stick at it because we've not played particularly well, but it was a bit of quality at the end - it was a great strike.

"He's 34, Carlos. He's stayed on the pitch and run his socks off and then produces that."