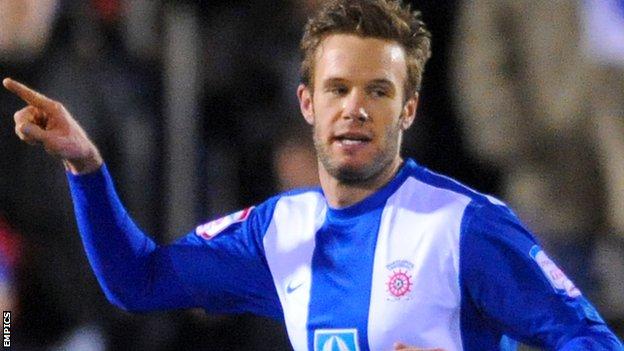 Andy Monkhouse scored both goals as Hartlepool kept their faint hopes of escaping relegation alive by climbing above Bury at the foot of League One.

Simon Walton hit a post for Pools early on but they eventually went in front when Monkhouse headed in a corner for his side's first goal for 762 minutes.

Bury's Craig Fagan was sent off shortly afterwards for a foul on Darren Holden.

And their afternoon went from bad to worse when Monkhouse met a ball from Jonathan Franks to head the clincher.

"Once again, it comes down to missed opportunities. After 15 minutes, we've had two great chances. That effectively finishes the game.

"One corner into our box and it's in the back of our net. We then lose Craig Fagan and we're down to 10 men for 70 minutes.

"That scenario sums up the season - full of promise, but didn't deliver enough."