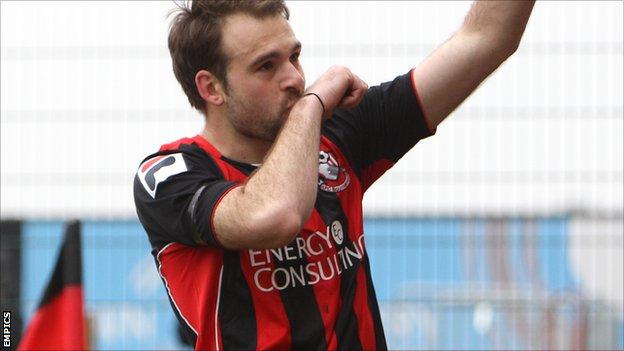 Bournemouth kept up the pressure on leaders Doncaster after coming from behind to beat Notts County.

Jeff Hughes opened the scoring for County with a header from inside the six-yard box after only two minutes.

Matt Ritchie equalised from the edge of the area before Brett Pitman netted for the sixth successive game with a strike from outside the box.

County's Andre Boucaud was sent off for two bookable offences before Ritchie added a third with a neat finish.

The result means the Cherries, who have three games remaining, stay two points behind Doncaster - who themselves have a game in hand.

"It was a really disappointing start for us when it's such a big game and such big expectancy to go 1-0 down within a couple of minutes.

"I think it was a real test for us and it was a good challenge and to see how we responded. We haven't done very well when we've conceded at home the first goal - it was really pleasing to see us come through from that. I think that in itself pleases me probably more than anything today.

"I didn't think we particularly played well 11 v 10, but it's difficult. I thought Notts County defended very well, they had a game plan, half time helped them - they could regroup - they stuck everybody behind the ball as we thought they would and it shows how difficult it is to break down when you do it right."

On Brett Pitman: "He could have had more again today, but it's a superb finish for his goal and from that range and in those areas on his right foot he's deadly."

On the five-point gap: "I think we're still in a position where we're not masters of our own destiny at the moment. If they (the chasing pack) win those games in hand then they go above us so no, not comfortable. I'd still say they're favourites to go up at this stage."