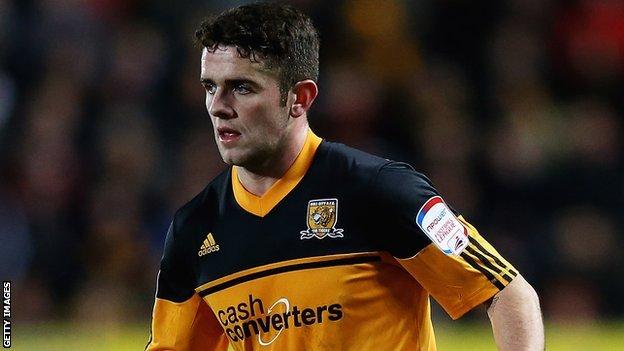 The Republic of Ireland international saw his second-half free-kick pushed into the roof of the net by Middlesbrough goalkeeper Jason Steele.

Scott McDonald forced Hull goalkeeper David Stockdale into a good low save after a clever flick.

The win for Steve Bruce's side means they are three points clear of third-placed Watford after leaders Cardiff held Gianfranco Zola's team to a 0-0 draw later on Saturday.

After losing to promotion rivals Watford in midweek, the visit of Tony Mowbray's Middlesbrough, who are now without a win in 10 games on the road, may have seemed the ideal fixture to get back on track.

But it was the visitors who had the better start at the KC Stadium, with on-loan Newcastle forward Sammy Ameobi easing past defender Corry Evans, but his tame effort was easily saved by Stockdale.

Mustapha Carayol's deflected cross tested Stockdale at his near post before Robert Koren hit a powerful effort for Hull that Steele saved.

Ameobi then saw a deflected effort go narrowly over the bar before Carayol forced Stockdale into another save after the break.

Hull, who had alternated between winning and losing in their previous eight Championship outings, then went ahead through Brady's free-kick which curled around the wall before Steele pushed it into his own net after the ball bounced in front of him.

Middlesbrough tried to respond but McDonald and Miller could not manufacture an equaliser and Mowbray's side are now seven points off the play-offs.

"It really took us to half-time to get going again, but we showed something, a bit of resilience and that determination to get a result. We don't want to be sitting through too many of them.

"I've heard some nonsense that he [Brady] watched somebody do it, whether it was [Cristiano] Ronaldo or [Gareth] Bale, and bounced it in front of the keeper. It looks to me like it hit a divot and the goalkeeper made a mess of it.

"But we needed a break and thankfully we've got it. It's put us in a really, really strong position."

"I don't think there was much in the game. I thought we were probably the better team, we probably created more chances. I thought it was a tight game, not much in it.

"The statistics are quite damning of how many games we've won in the last 16 and yet we can look back at a lot of those games, like this one, and think we didn't get what we deserved.

"But you've got to put the ball in the net when you have opportunities and we haven't done that consistently enough."