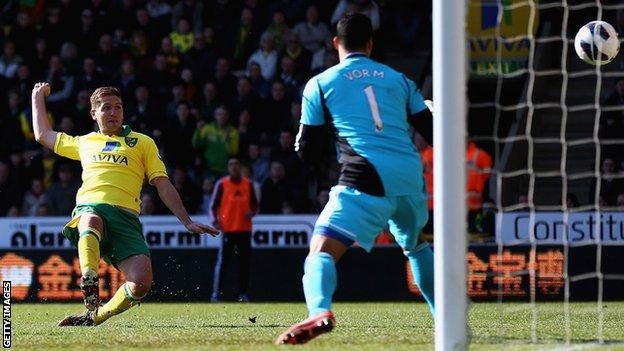 Luke Moore's fifth goal of the season rescued a point for Swansea against Norwich at Carrow Road.

Michael Turner put the Canaries ahead early in the second half after Robert Snodgrass equalised Michu's opener for Swansea.

And the Spanish midfielder missed a glorious chance to give Swansea all three points in added time.

The result leaves Norwich in 13th place, still only five points clear of the relegation places.

It was Norwich's fifth draw in their last six home matches, and their continued failure to open a comfortable gap over the teams in the bottom three will be a worry for manager Chris Hughton.

For much of the second half they looked the stronger team after Swansea dominated possession for the opening 50 minutes.

But the Canaries could not find a decisive third goal, and Swansea should have taken all three points when top scorer Michu fired over from seven yards in stoppage time.

It was another entertaining match for the neutral observer - the last four matches between these sides in the Premier League have now produced 20 goals.

Midfielder Leon Britton was left out of the Swansea line-up following the birth of his twin sons.

Manager Michael Laudrup gave Moore his third start of the season, while Norwich had goalkeeper Mark Bunn back in action after missing one game following his red card against Sunderland.

And they were quickly in action as Bunn saved from Moore after Michu's pass had put the striker into a little space at the edge of the 18-yard box.

And Michu had the ball in the back of the net, but the goal was ruled out because of Moore's foul on Jonathan Howson.

Bunn was forced to leave the field with a groin injury in the 15th minute, with Lee Camp taking over in goal.

The Canaries' best chance fell to Michael Turner after Snodgrass had made inroads on the Swansea left - Michel Vorm saving well from the defender's scuffed half-volley from six yards.

In fact, Snodgrass had a good argument for a penalty in the build-up as he appeared to be pushed by Wayne Routledge.

Swansea dominated possession and took the lead in the 35th minute as Nathan Dyer, Chico Flores and Jonathan De Guzman teed up Michu who blasted his 21st goal of the season into the roof of the net.

Dyer fluffed a golden chance a few minutes later, and Swansea were immediately punished as Kei Kamara freed Elliott Bennett whose cross was headed into an open goal by the unmarked Snodgrass.

The goal gave Norwich new impetus, and they finished the half stronger with Kamara firing a shot over the bar.

Swansea started the second half in complete control, with Camp forced into a point-blank save from Moore after Wayne Routledge had outfoxed the defence, but Norwich made light of their lack of possession to stun the Swans.

Bennett was again the provider, his right-footed free kick catching the Swansea defence flat-footed, and Michael Turner fired in a fine shot on the half-volley to give the Canaries the lead.

Swansea were rocking, with the home side displaying the greater hunger.

But the game swung again as the visitors manufactured an opening for Moore, who fired in his fifth goal of the season from six yards after Angel Rangel headed across the box.

Both teams pressed for the win in the dying minutes, with Michu's added-time miss the closest either side came.

"We wanted a win but nothing changes, we still have to get enough points from the six remaining matches to make sure we're secure.

"Their camp might look at it a little bit differently, but I thought on the balance of play it was a fair result. I couldn't fault the team for their endeavour, we got ourselves in scoring positions but unfortunately we conceded two soft goals.

"We spoke about the goals we conceded, which I felt were poor to concede, but we gave ourselves opportunities to score and that is what we have found difficult."

"We dominated completely for the first 30 minutes, [it was] a great goal from Michu. And then out of nowhere we let Norwich come back into the game a couple of bad decisions and suddenly they equalised.

"We started the first 10 minutes of the second half well and then suddenly we're 2-1 down because of some misunderstanding or bad marking at a set-piece.

"I think it's important to come back with a positive result because... we have two weeks now before the next game against Southampton, which for me we have to win if we want to end up in the top 10."